I spent two more days of skiing with the S90 in my parka pocket. Both days were at Windblown XC Ski Center in New Ipswich, NH and within eyeshot of snowcovered Mt. Monadnock. So far I have been shooting the highest quality and largest resolution JPEG files.  I'll check out RAW files sometime in the future.

Like most cameras, I find the S90 has a tendency to underexpose snow scenes.  Metering systems tend to underexpose snow because they are trying to convert a bright scene into mid-tones.  Unfortunately, when you underexpose white, the mid-tone you get is gray.
The easiest way to get whiter snow is to increase the exposure, using EV compensation.  I typically shoot scenery in the P mode, and I have programmed the S90's unique front ring (around the lens barrel) so I can adjust EV (exposure compensation) with it.

When on snow, I set the front ring at +1 EV. This adds one stop of exposure to the metered amount.  It makes the snow whiter, and dark objects against the snow, such as trees and people, become brighter.

The following are some examples.


Normal evaluative metering (If you don't notice the grey color of the snow,
put a piece of white paper up against it): 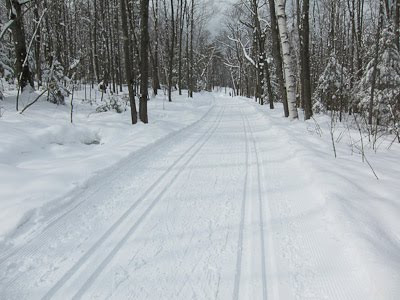 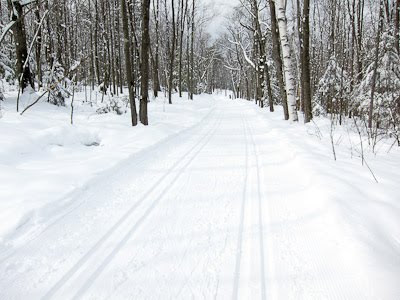 Having said all this, in the bright light that accompanies skiing and with polarizing goggles, it is often impossible for me to use the LCD and the histogram to verify that the exposure is reasonable, even when I have set the EV compensation at +1 EV.  For this reason, I have come up with an additional procedure.
I have customized the custom mode (which is then accessed by turning the command dial on the top of the camera to "C") to provide me with instant three-shot exposure bracketing.  I set up my custom mode to shoot in P-mode, auto ISO, auto WB, no flash, center focus, evaluative metering, and exposure bracketing. I have the three-shot bracketing set up to shoot at 0 EV, +1EV and +2EV. I download everything onto my computer at the end of the day. I then pick the image I like best of each set of three, and delete the rest.

For what it's worth, the small free-spinning wheel on the back of the camera adjusts ISO in the P mode.  I usually keep this set at AUTO ISO. In low light situations, the camera will bump up the ISO as far as 1600 if necessary, though when outdoors on snow the ISO will generally remain at its lowest level of 80.
All these settings work nicely for me, as long as I don't inadvertently nudge the spinning wheel on the back of the camera.  I find it interesting that on the larger G-series cameras like my G-9 (and I presume also on the newer G models) the spinning wheel has clicks on it.  This is preferable in my opinion and in the opinion of everyone I've read on various photography forums such as at dpreview.  My hope is that they will change this on the next version of the S-series.
Posted by Peter F. at 19:45 No comments: 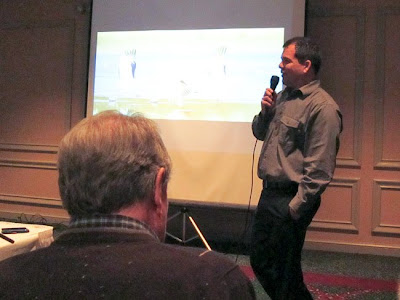 Last weekend Robert O'Toole gave a fantastic workshop on wildlife and nature photography.  It was held at the Radisson Hotel in Chelmsford, MA, and was sponsored by Nashoba Valley Photo Club (of which I am a member), Hunt's Photo and Sigma lenses.

There were 90 attendees from clubs from several New England states.  All of us were rewarded with some beautiful images and some great tips and techniques. 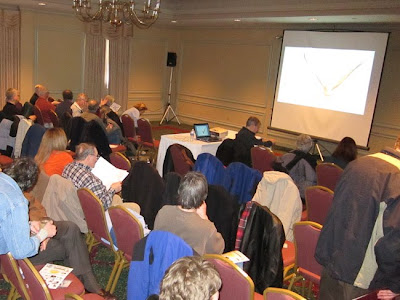 Robert showed a series of his wildlife and nature images, most noteably eagles and grizzly bears in Alaska and shared tips and techniques used to capture the images.  He concluded the three hour workshop by showing a few post production techniques he's developed over the years with Photoshop, all of which are available for purchase on a CD.
I like to bookmark other photographer's Web sites.  And I most certainly recommend bookmarking http://www.robertotoolephotography.com/ !  If you get a chance, at least go into his web portfolios and browse through his Alaska photos.  On his Web site you will find information on his field workshops to Alaska and other destinations.  He also offers workshops in post production image optimization. 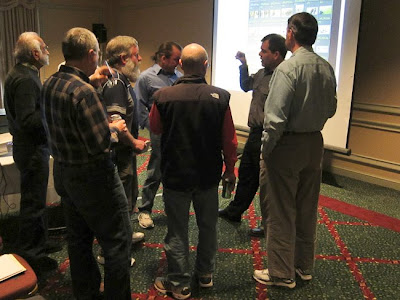 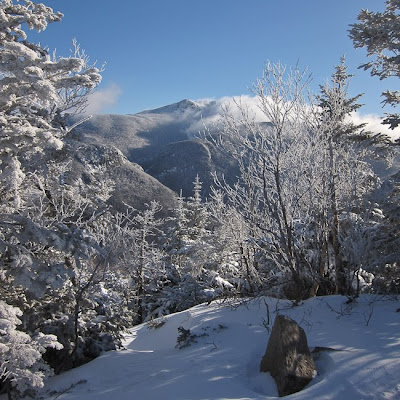 This was my first outing in the cold with the pocketable Canon S90, arguably the best (matter of opinion of course) compact camera currently available.  A compact camera in my opinion must be sleek enough to not only fit in the front pocket of a pair of jeans, but also slide easily into that pocket.  To do this it must have a retractable lens.  It also has to be light enough to be barely noticeable.  A camera of under 7 ounces will do the trick.
In spite of the sun on this day, the base temperature at the mountain was about 15F. We saw no thermometers at the top of the mountain, and maybe this was a good thing.

I kept the camera in an outside pocket of my jacket so that it would be cool enough not to fog up when using, yet warm enough not to freeze.  To be honest, any compact could probably have done as well with the images.  With such bright sun I was able to shoot at ISO 80, and ISO where small-sensored cameras will do just fine when the sun is behind your back.

Basically I shot large, high quality JPEGs in "P" mode, which is a mode that allows the camera to pick both the shutter speed and aperature.  I used Auto White Balance, and Auto ISO (though there was enough light so the camera always chose ISO 80). After each shot I confirmed my exposure with the histogram, then used the camera's unique front dial to make any EV compensation adjustments should I feel a follow-up shot was necessary to get the exposure right.  This was the best I could do, because with such bright light it was next to impossible to see the LCD in spite of its 3" viewing area with 461,000 dots.
The auto white balance resulted in a bit too much blue, so I added some amber in post-processing with Lightroom.  But snow does funky things with white balance and exposure.  Next time I might try the snow scene mode and see how that does.  The snow scene mode adds a bit more exposure,which is important in snow scenes to compensate for the light meters tendency to reduce white snow to medium grey tones.  The scene mode also helps with the white  balance problems created by snow.

Other than that, I cropped most of these in Lightroom as it was very hard in the bright light to properly compose the pictures in-camera, especially since I was wearing polarized ski goggles!  That's Mt. Lafayette in the background in the 1st, 3rd and 5th images.
I have 19 pictures posted on the Web site, which can be accessed with this link:
http://www.peterfraileyphoto.com/cannon02042010 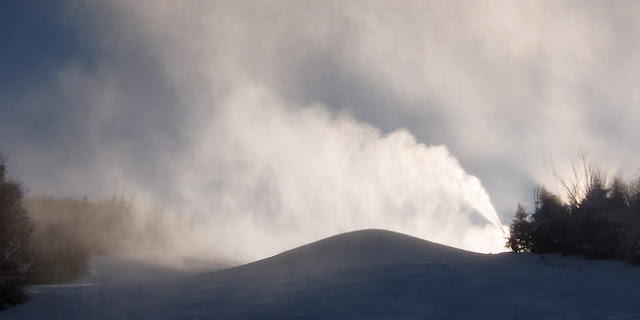 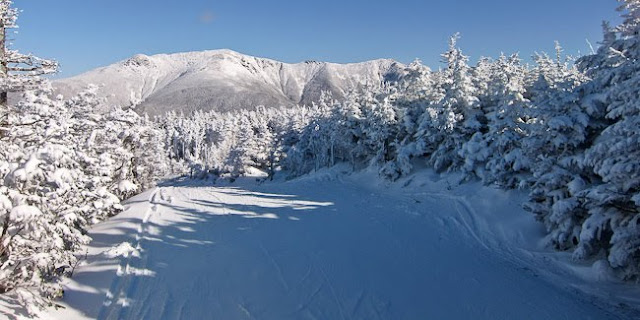 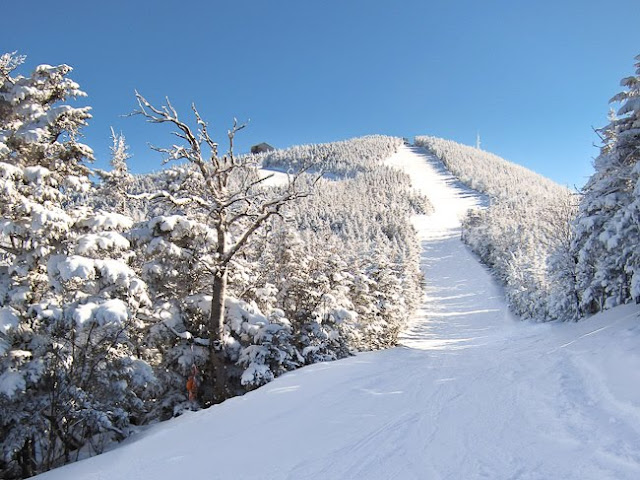 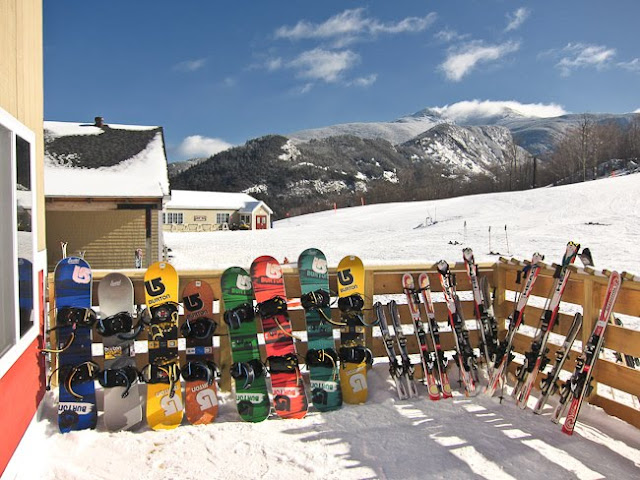 I think I got spotted by a woodpecker!

The shutter click made by a dSLR can disturb wildlife if you are close enough for it to be heard.  As you can see in these three images, the male Downy Woodpecker shown here came closer and closer to locating me.  I am sure it was the shutter click that attracted his attention.  This three-image sequence was taken with my Olympus 70-300mm lens at the full zoomed-in 300mm (600mm equivalent field of view).  Even then, I had to crop in Lightroom to get a reasonably tight composition. 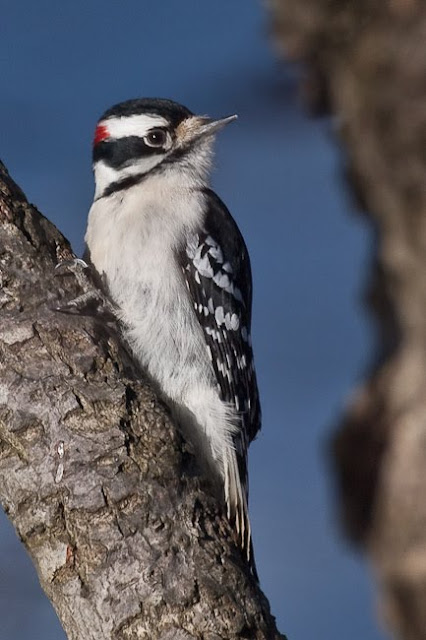 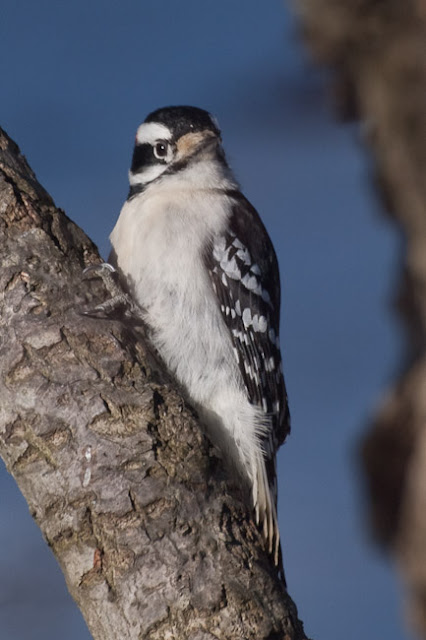 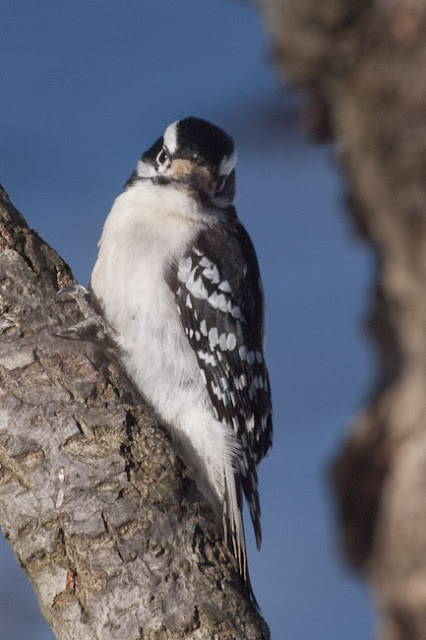