Behind the Scene: Yellow Crab Spider


I was thrilled when I captured this scene, a crap spider and its prey.

﻿﻿﻿
What was so cool about this is that my wife and I were on our way south into Montana from Alberta, Canada.  The provincial flower of Alberta is the wild rose!  While I don't believe this is a rose,  the fly might very well have landed expecting the yellow center found on wild roses when in fact the center was a yellow spider in-wait.  Or, at least that is how I envision this all unfolding.

For the prior week in the Rockies of Canada it seemed I had my 70-300 zoom on my camera at nearly all times, as the wildlife we saw was big and usually far away.  That included mountain goats, long horned sheep, elk, grizzly bears and black bears. I wasn't prepared for photographing wildlife as small and close as this spider!

Just before crossing the border we stopped at a rest area to use the facilities.  I was walking back to the car and saw a patch of pink flowers blowing in the wind.  The spider seemed like a yellow light flashing back and forth on the flower in the breeze.

I was surprised that something this small could hold on, not only to the spider but to the flower, because it was very gusty and breezy.  My guess is that this little spider is stronger for its weight than a human.

I grabbed my camera from the back seat of the camera and put on the 14-54mm zoom, which has a reasonable closeup feature.  It was actually quite funny watching me move from left to right trying to follow the spider in the wind.  I took what I thought were hit or miss shots, and I worked quickly as I expected the spider and fly to blow off into the wind at any moment.  Fortunately, I ended up with a good selection of sharp images.


Update 2013-Feb-28:  I just received and email from the son of one of my fishing buddies that has added more light on the subject.  Thank you Ryan Bridge!

The wasp that the Crab Spider has is a Braconid wasp. They're small in size (maybe 1" average).

They typically are a parasitoid upon caterpillars. A good example is the Tomato Hornworm and the little, white cocoons that people find on them (many people think they're eggs). The female wasp deposits 100's of eggs into the living larva. The eggs hatch and the tiny wasp larva feed on the larva from the inside, often after the larva pupates. In most cases, the pupa is totally consumed from within and the wasp larva build cocoons within the confines of the pupa (inside the cocoon in the case of most moths). They'll over winter if necessary and nearly all 100 or so, will emerge in the Spring as adult wasps. Adult Broconid wasps are predatory and typically feed on caterpillars. They do not build nests or hives, but remain solitary.

Therefore, it's not uncommon for the small wasps to be crawling among the plants and flowers, searching for food. Coming in contact with a Crab Spider and thus, becoming a lunch for that spider, isn't all that rare. Crab Spiders have some of the best camouflage of all spiders, as they will patiently sit and wait for an unsuspecting bug of any kind to get within reach. They commonly feed on pollinators, and use the center of a flower as their "hunting blind". Crab Spiders rarely bite humans, but again are somewhat small and usually go unnoticed due to their size and camouflage.

Hope this helps to explain that pic a little better.

This image has been growing on me.  It is one of several black and whites (actually all were color images converted to black and white after the fact) that I captured one day in June, 2012 while driving south from Jasper, Alberta to Lake Louise.  The day was dark and dreary and the original color image was really rather drab... so it was perfect for experimenting with a black and white conversion. 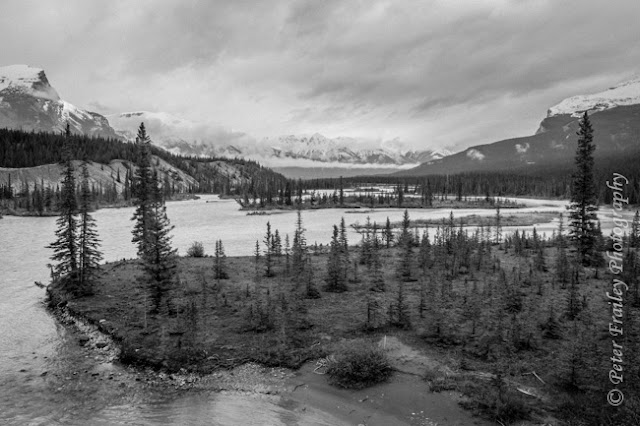 The image above is the black and white as it was first created within Lightroom.  It was just a matter of clicking the button labeled "black and white". I liked it enough to submit it as a 10" x 15" print to my photo club for our February salon.  It received a nice score from the salon judge, Don Toothaker, so maybe that's why the image is growing on me!

However, always helpful, Don did suggest that I play a bit with the sky and background mountains to try to get more detail from that area of the image.  I thought it would be hard to do, because my recollection was that it was quite misty in the distance.  But when I got home from the salon, I opened the image in Lightroom and saw that I had never really done anything to the picture except click on the black and white button, and everything else was set at the usual Lightroom defaults.  I do own Nik filters and was surprised I hadn't tried any of them.  So, before going to bed, I exported the RAW file to Nik Silver Efex Pro as a 16-bit TIFF file and simply clicked on several of the 20 or so presets to find one I liked.  The presets are great.  You can start with any one preset and then make adjustments using a number of sliders. In this case I chose "high key", hit the "okay" button, and the image file popped back into Lightroom.  Simple and sweet.

I'm not sure whether this is what Don had in mind or not, but I absolutely love the result, and I thank him for his suggestion. 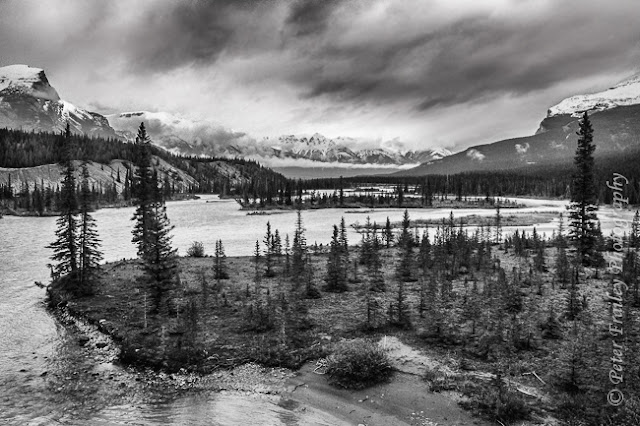 In my last post I showed the following image and lamented about how unfortunate it was that the top tree across the gorge ran right through the middle of the image.  This is Sunwapta Falls in Alberta, Canada. 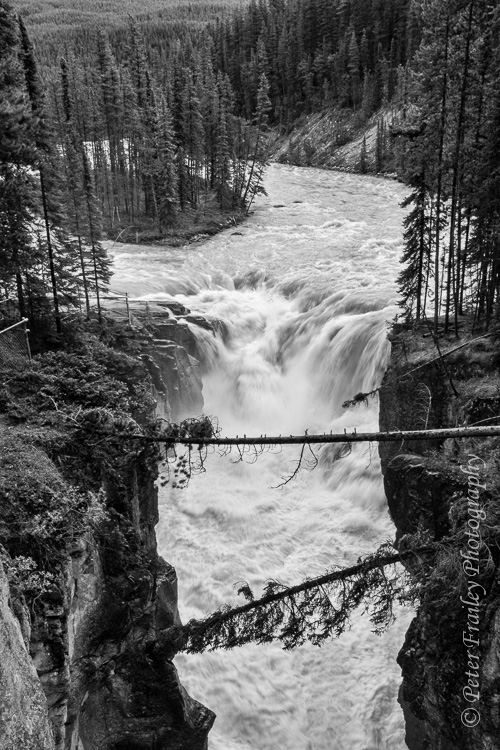 Of course, it is not the tree's fault that it bisects the image.  Unfortunately, it also runs right through the bottom of the waterfall.

My solution in the last post was to try a bit of cropping off the bottom so as to move the trees down from the middle of the image.  This was accomplished by cropping with a 4:3 aspect ratio instead of 3:2.  But the fact remains that the top tree runs through the bottom of the waterfall.

Since I have little proficiency in photoshop, I figured this was the best I could do.  But I tried using "Content Aware" in PS5.  It was amazing.  In a total of 10 minutes I was able to remove the tree in question plus another small fallen tree on the right, near the top of the waterfall.  I even removed much of the chain link fence that is at the top of the waterfall on the left. 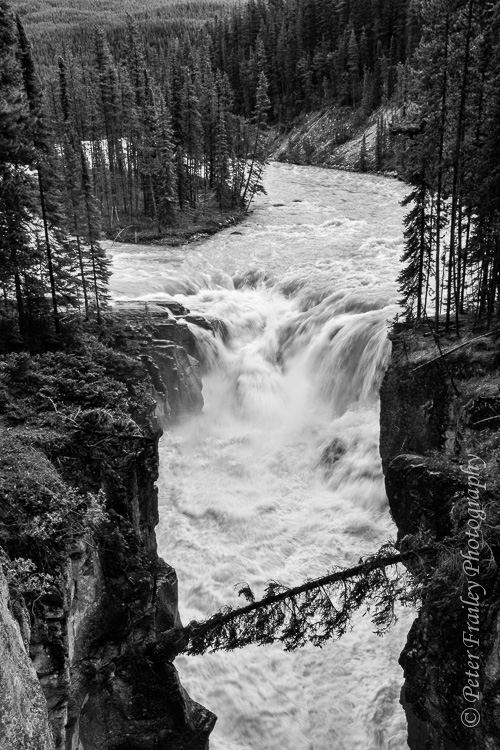 Now I need to decide if cropping at the bottom as shown in the image below, strengthens the image.

What do you think? 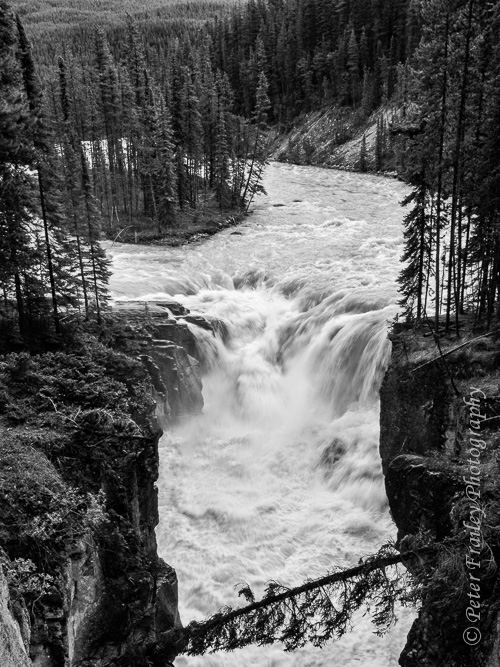