In my prior post I outlined the procedure I am using to duplicate my old slides.  But I started with a set of Kodachromes taken by my dad when we left the Boston area and drove out to Los Angeles, where my dad worked in 1955 and 1956.  Below are several of my favorites from that batch of slides (I'm the bigger of the two boys): 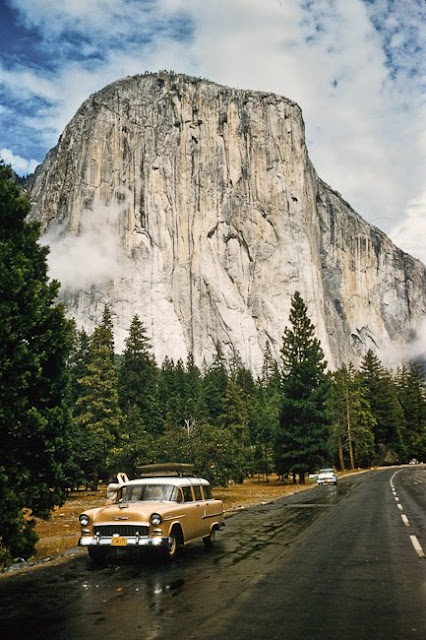 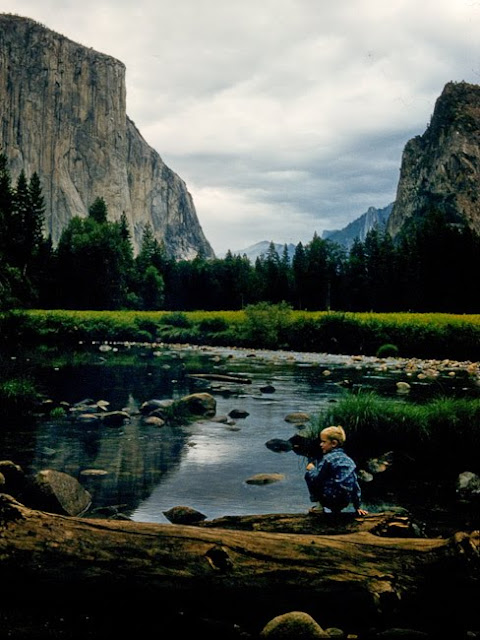 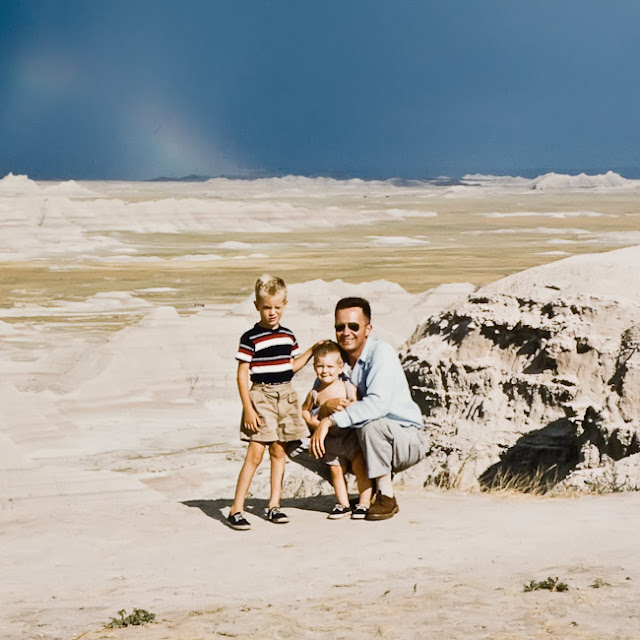 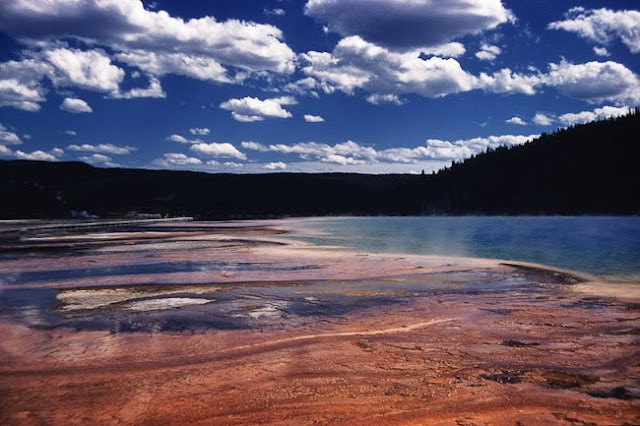 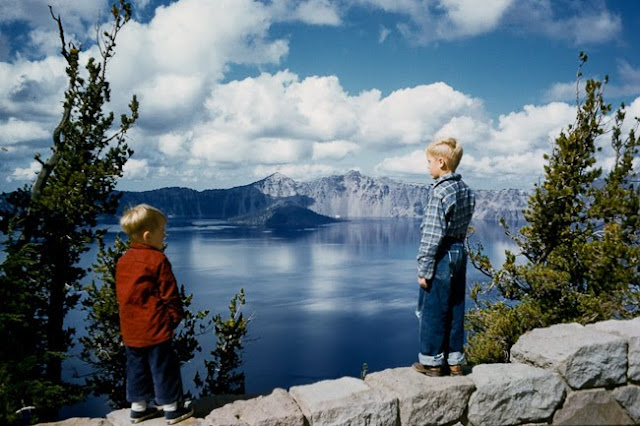 To scan or not to scan old Kodachrome slides (revised)

For a few years I have been wondering what to do with my old slides.  I am now ready to bite the bullet and get them digital-ized. It is just so much easier to show images on a computer or televison or digital projector. I have about 3000 slides taken between about 1968 and 1984. And my dad has some great Kodachromes from the 1950's taken with his Kodak Retina IIIC rangefinder.  As the slides age I am fearful of lost quality.  This is another reason to convert them to digital now.

Scanning seems to be the standard approach to creating digital files from slides, negatives and prints.  To this end I have considered various dedicated film and slide scanners.  The Nikon Coolscan would be a good choice but even the basic one is over $1,000 and currently very hard to find. Many of the best slide scanners have been discontinued, such as those made by Minolta. There are some newer dedicated slide scanners that sell for about $400, and I have been impressed with what I have read about Plustek's OpticFilm line of film scanners.

But scanning takes a lot of time. With the OpticFilm scanner a quick scan can take a minute, while the highest quality scan can take 17 minutes.  And with 3,000 slides I just can't justify the time required.  So, I decided to go in a different direction.  I purchased a "digital duplicator" that screws into the filter threads of a dSLR or any point-and-shoot or ultrazoom camera that has a lens adapter. The one I bought is by Opteka.  Bower makes one as well.  I paid about $50.  The camera I am using for this is a Canon G9.  I already had a lens adapter for the G9 for use with filters, so this was not an additional expense.  I could have used my dSLR gear, but the G9's 3" Liveview LCD with live histogram makes viewing the slide and getting a good exposure simple.  The limitiations of a small-sensor camera like the G9 are not evident during the duplication process because I can shoot at base ISO of 80 and dynamic range has already been reduced during the original image capture. An AC-adapter is also helpful, and I already had one of these for the G9. 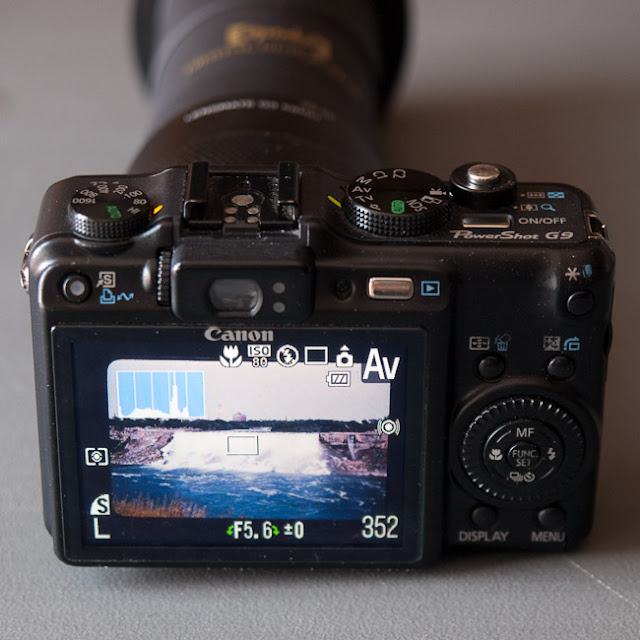 The duplicator is basically an extension tube that is screwed into the filter threads.  A 58-52mm stepdown ring was included in the Opteka kit. At the thread end of the tube is an acromatic closeup lens (equivalent to a +10 diopter) and at the other end there is a slide holder.  You just need to point toward your light source and shoot!  Compared with a scanner that takes one to 17 minutes to process the image, with this device the processing is less than 10 seconds (I use the camera's custom self-timer set for 8 seconds). 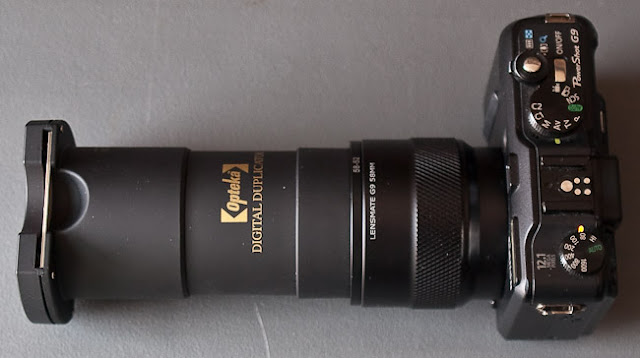 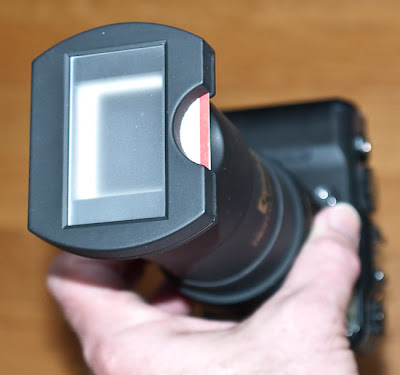 Right now I am going through 100 slides my Dad took in 1955-56, when we drove through national parks on our way west to live in California for a year.   The first few were shot in JPEG, but I quickly switched over to shootng in RAW format. ISO is set as low a possible, with the G9 that is 80.  Aperature priority allows me to use the sweet-spot in the lens.  Depth of field is not an issue.  Occasionally the focus point needs to be moved around to a high contrast area of the slide to ensure focus-lock (example: I had to move the focus point from the white area of Niagra Falls as shown in the image above to another area with more contrast). Using the Liveview LCD and the Liveview histogram, I sometimes need to adjust EV compensation to keep away from blown hightlights, but this is rarely needed because the slides themselves have generally been properly exposed.  The files are then imported to Adobe Lightroom for the same tinkering I would do with a scanned image.

The quality of the results is better than I expected.  I am very happy with what I see on my 24" computer monitor, 5"x7" prints are excellent and the one test print I did at 8"x12" was astonishingly good.  I plan to try 15" and 18" prints, to determine how large prints can get before the quality degrades, but have not done so yet. Of course, your mileage may vary, and perhaps I gave the prints high scores because my expectations had been low.  But most of these slides are snapshots (kids at the beach) or "record" shots.  So, they don't need to be of the very best quality, and I am willing to sacrifice a bit of quality (compared with scanning) in exchange for the speed of getting the job done.

My guess is that after duplicating 3000 slides with the Opteka devise, I will have the best 100-200 slides scanned by a professional lab. But this will be at a small fraction of the cost of buying a scanner and will take none of the time.
Posted by Peter F. at 17:45 No comments: