I seem to be celebrating photos from 10 years ago (see prior two posts), when I began by dSLR experience with a borrowed Nikon D40 and kit 18-55 zoom.  It was all during a trip to the Tetons and Yellowstone with my wife, Laurie.

For days we'd not seen bison.  Then, we couldn't get away from them! This scene was so much fun. Obviously, in this location buffalo find it easier walking on the road than clambering through the brush and woods. 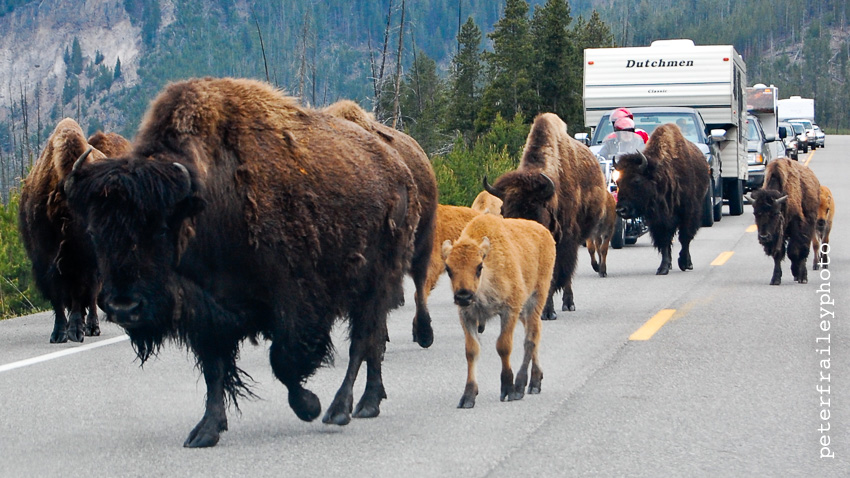 This image of Moulton Barn in Jackson, Wyoming was taken 10 years ago next month, during a two week trip that took my wife and me in a rented car (a Ford Taurus… yuck!) from Salt Lake City to my brother’s home in Spokane, WA via the Grand Tetons and Yellowstone. 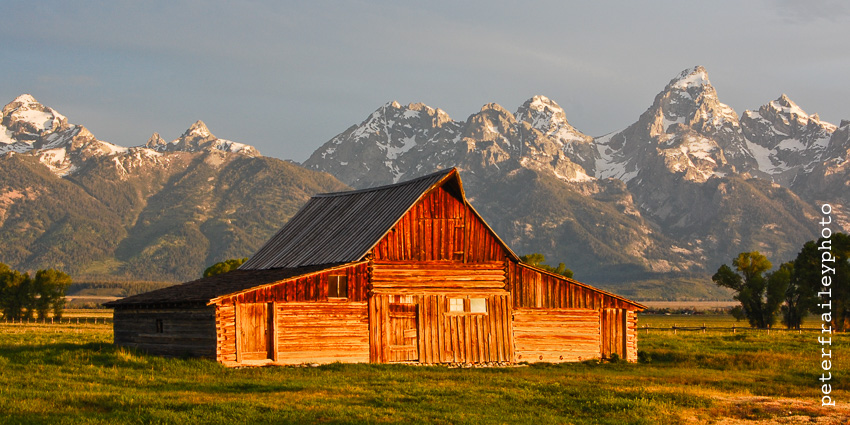 The barn image was taken on my third day with my first dSLR.  Actually, it wasn’t even mine.  My brother (in Spokane) had just purchased a Nikon D40 with it’s 18-55 kit lens.  He’d been eyeing Nikon dSLRs and was waiting until a model was available for under $1,000.  That seems like a lot of money for this 6mp interchangeable lens camera and kit lens, but it is so easy for us to forget just how expensive those early dSLRs were.

I actually had no interest in having a photographic trip.  That’s hard for me to believe now, but I had planned only to take my little 3mp Panasonic point and shoot to document the trip. I had no interest (or so I thought) in lugging around anything larger and heavier.

So, I told my brother this and the next thing I knew a UPS truck dropped off at our house his brand new camera with a note to “use the hell out of it” and to return it to him when we arrived in Spokane.

I remember reading the manual on the plane.  The first day, as we drove from SLC to Jackson, Wyoming, I shot in the auto mode.  As I recall there was a green icon of some sort on the mode dial for the no-brainer mode.  Or was it a red heart?  Anyway, that was good for one day.  On the second day I switched to P mode, but since I knew nothing about EV compensation or white balance or ISO adjustments, it didn’t seem to me that P mode provided anything different than the Auto mode.  On the third day (when I took this picture) I switched to Aperture Priority (though I have no idea in the world why I chose F13 instead of, say, F5.6).  Aperture Priority is what I was used to, from 30 years before with a Nikon EL film camera.

I do wish I had learned about white balance, ISO, EV compensation and RAW during the trip. All my images were shot as jpegs.

This image is actually on a wall in my office as an 18” print.  It looks great, though because my eyes and my standards have changed over these 10 years, I do seem to be more and more bothered by the color blotches I see in the sky in the 18” print.  On the other hand, from a normal viewing distance, it isn’t noticeable.
Posted by Peter F. at 09:42 No comments:

Photo Story: Getting a Speeding Ticket in Yosemite Valley

This photo, taken by me in 1977 in California's Yosemite Valley, makes me laugh every time I see it.  Sometimes, it's really all about the title, isn't it?

I really don't remember what was going on here. I was not the driver of the car but merely walking down the street ...but to be honest, the mounted park ranger was giving out a parking ticket, not a speeding ticket.  Nonetheless,  I couldn't resist my chosen title as there's just something laughable about a ranger on horseback versus a Datsun 240Z sports car. 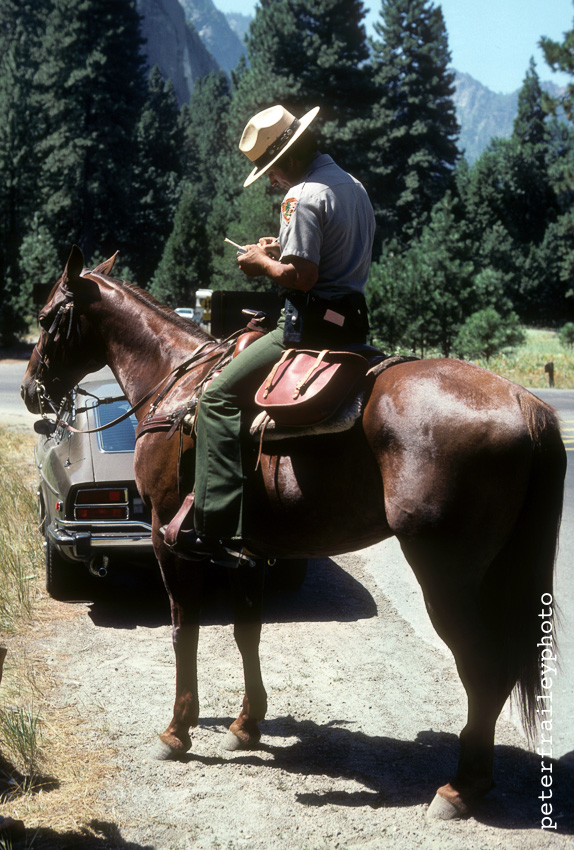