I own both of these cameras.  And I like them both.  Very much.

But I found it interesting the other day to find that I pick up the Sony more than I do the Olympus.  I was at first surprised by this, but it was proven by filtering and sorting my Lightroom library of images by camera and date.

This is what I found:

During the time period that I have owned both cameras, I have used the NEX-6 more often and by a large margin: I have 1,200 keepers from the NEX-6 and 400 from the E-M5. This is since March, when I purchased the NEX-6.  Assuming my "keeper rate" is the same for both cameras, I am using the NEX three times as often.

What's up with that?

Further confusing me is that I have a ton of lenses (well, 8) for the Olympus, and only one lens for the NEX-6.  I have four reg43 lenses that are quite usable on the E-M5 with an adapter ring.  I also own one zoom and three primes designed for m43.  For the NEX-6 I only have the 16-50mm kit lens.

So, with the Olympus seeming to be a better camera (and of course your mileage may vary) and with more lenses available for it in my kit, why am I picking up the NEX-6 more often?

Well, I now realize the answer is quite simple:  The NEX-6 feels better in my hands.  In other words, it is all about ergonomics and haptics.  (I need to admit that only after adding an accessory grip did the NEX-6 feel so good in the hand... see image below.)

What about image quality? I think we've come to the point with cameras where they are all good. Both of these cameras create excellent pictures.

So what is it that feels so good about the Sony NEX-6?  Here are my answers to that question:

I think a lot of mix for me going forward will be determined by the upcoming high quality zooms rumored to be arriving this fall from Sony and Olympus. My preference would be a 12-60 (Olympus) and a 16-80 (Sony), both with an F2.8-F4 maximum aperture.  That would be the full frame equivalent of 24mm to 120mm.  For me, such a lens would be so useful that it would rarely leave the camera.

On the Way to the Nursing Home

Two weeks ago today my mother passed away after a long illness.  She had been a resident of a nearby nursing home for nearly two years.  Because she had spent the last 25 years in considerable pain from one problem or another, her passing on July 30 at the age of 90 her passing, I believe, was a blessing.

When I visited her during her two year stay in the nursing home it was usually in the afternoon, on my way home from work and before her dinner was served.  But during the last couple of weeks of her life I went over some evenings, after "lights out", to simply say good-night to her and kiss her on the head.  Maybe she knew I was there, maybe she didn't.

During those evening drives to the nursing home, I was blessed with several gorgeous sunsets.  It made me think of a little Disney Golden Book my mother read to me when I was young.  It is called "Grandpa Bunny".  Just go to Amazon and search for it.  It will set you back about $3.50.  It does a wonderful job of teaching young children about death.  The story finished with a beautiful sunset painted by Grandpa Bunny from heaven.

I think the best sunset was the night before she died.  As I drove down the long driveway, I faced west and could see the sunset above the roof line of the nursing home.   Here are a few shots taken that night.  I don't know which one I like best... so I am showing all three. 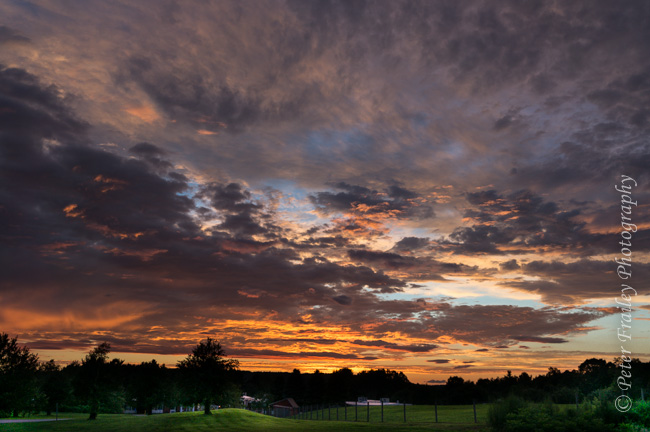 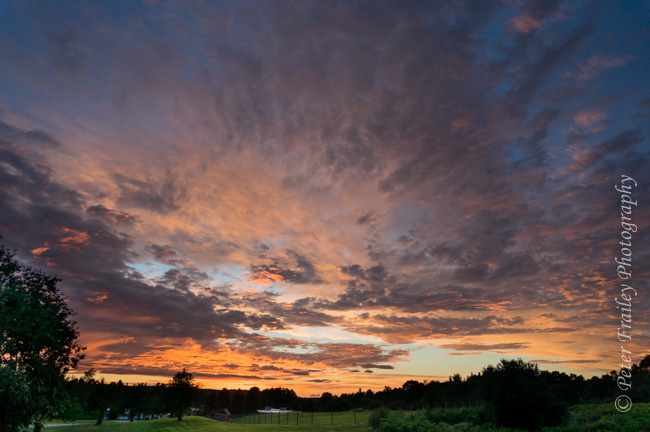 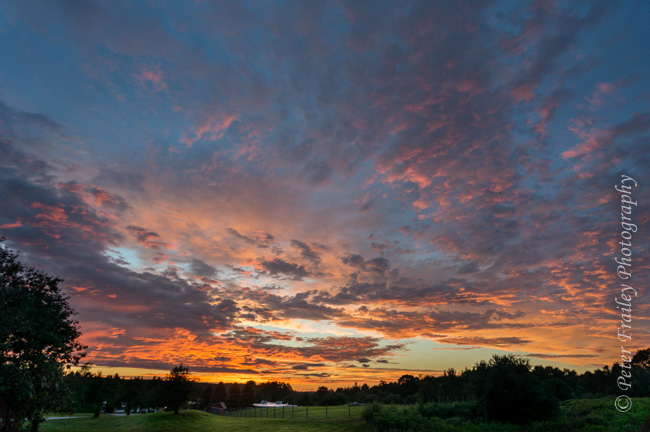 On the way to the supermarket

Well, it was late in the day (about 8pm) and I needed a couple of things at the supermarket.  As I left the house I noticed a lot of bright yellow clouds toward the east.  I went back into the house and grabbed my camera and stuck it in the console between the two front seats.  I sensed a possible photo opportunity.

The brightly lit clouds were interesting because the sun was setting in the west (nothing profound there, of course).  What was happening was that the setting sun (this was about half an hour before it actually slipped below the horizon) was shining toward what had been big thick billowy white clouds.  And as the sun got lower, the light got warmer and created some beautiful color on the clouds.

Frustrating for me was finding a spot to stop the car where I could get a good view, but also have something interesting, perhaps, in the foreground.  I also knew the perfect lighting would be short lived.

I pulled off in the center of town and took the shot below.  Every notice how hard it is to take a photograph of a distant object if you are anywhere need a road?  There are telephone poles and wires everywhere.  So I did the best I could.

There was a time when I would have worked hard to eliminate cars from the composition.  But I think the cars, especially with the headlights really add something here.  I like the picture a lot, even with the telephone poles and electric wires.  I doubt I would ever hang it on a wall, but I definitely find the image intriguing.


Seven minutes later when I arrived at the supermarket (below) the clouds were entirely different:  Less bright and more pink. 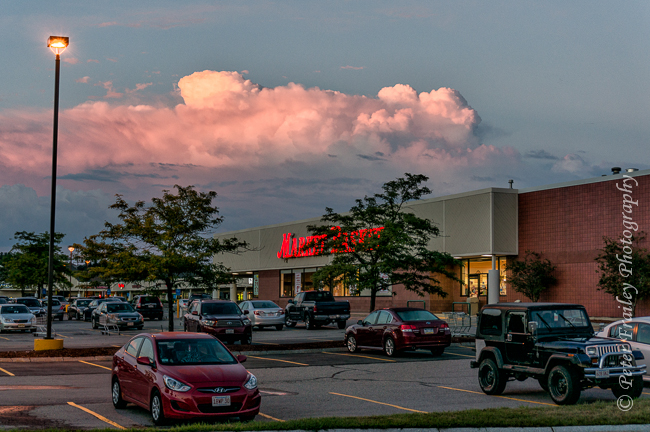