Why I like my Sony a6000 more than my Olympus E-M1: Part 5: Autofocus with native lenses

When it comes to autofocus with native lenses (Sony E mount and Olympus mFT mount), until two months ago, I would have given the Olympus the edge... slightly. I feel certain that when using single autofocus (AF-S), the Olympus is a tad faster than the Sony. This seems to be especially true in low light situations. Yet, I've never noticed the difference to be enough to actually make a difference in my type of shooting.

However, in the last couple of months, I've begun to use what is called "back button focus" (BBF).  I will explain how this works further below, but it basically allows you to obtain either single autofocus without changing out of the continuous autofocus mode.

It is with continuous autofocus that the a6000 shines (compared with the E-M1). On the a6000 I find AF-C to be as fast and confident as AF-S.  On the Olympus I do not have the same confidence in AF-C.  It seems much slower and more tentative, going in and out of focus repeatedly and at a rapid pace, as it seemingly hunts to achieve  focus.

I have set the a6000 to operate in AF-C. Then I  programmed the AEL/AFL button on the back of the camera to be a focus lock button. In the menu, you also need to turn off "AF w/shutter". I generally I use the smallest single "flexible" focal point.  (There are other good focus area options that are beyond the scope of this post.)

This is how BBF works:

If you are photographing a still object like a landscape, press the AFL button with your thumb and release. I generally use the center focus square to achieve focus on the intended main subject, and then recompose if the main subject is to be off-center. You can now take one or more images without refocusing.

Now let's say a deer runs across your view.  Here's a chance to use continuous autofocus. Just press and hold the AFL button and it will continuously focus as you pan the camera, but you must keep the focus point on the deer. There are some other cool focusing options that I have played with but not used.  In particular, the AF-C with "lock on" seems to have great potential, as it would in this case lock onto the deer and follow it around the frame. Additional features can be realized by choosing a different focus area, like wide or zone, but I won't go into that here.

Now with the Olympus, you can also set things up with BBF. It's just that AF-C seems so sluggish.  But more importantly to me, the actual button is in the wrong place and too small and squishy. I guess it's an ergonomics issue for me.

Email ThisBlogThis!Share to TwitterShare to FacebookShare to Pinterest
Labels: sony a6000

Why I like my Sony a6000 better than my Olympus E-M1: Part 4: Focusing with old manual lenses

What I am talking about here is using manual lenses with adapters on the a6000 (and Olympus E-M1).  Obviously one difference is that the focal length of any given lens differs on these two cameras.  For example, my Tamron 90mm macro lens works out to an effective 135mm on the Sony and 180mm on the Olympus, due to the respective crop factors of 1.5x and 2x. On the Sony it's a nice portrait length.  On the Olympus, not so much... but it gives a nice reach for flowers at botanic gardens.

What I like about the Sony is how it handles focusing with my old manual Minolta, Nikkor,and Tamron lenses.


Like the Olympus, Sony has focus peeking, and I do use it. With focus peaking activated via the Sony menu, it will function without touching the shutter. Just hold the camera up to your eye or watch the LCD and focus the lens with your left hand. But more importantly to me, Sony's focus peeking feature operates even while half pressing the shutter.

This is what I do:

I press the shutter half-way and hold it there while I am focusing the lens with the left hand.  When the subject shimmers from the peeking (I like the yellow peeking choice, but you can choose also white or yellow... my E-M1 offers only white) I then fully press the shutter. I like the fact that once I've focused, my shutter finger is already half-way to activating the shutter.

On the other hand, with the Olympus I feel there is too much of a delay between reaching focus and activating the shutter.  This is because the peeking only works with the shutter button unpressed.  As soon as you half-press the shutter the peaking unfortunately ceases.  It may be all in my head, but this makes me feel momentarily lost.

Basically with the Sony, once you have achieved focus you are only a half-press away from capturing the image. With the Olympus, you are a full press away. Especially for macro photography I feel it's easy to lose focus with the Olympus during the full press of the shutter.  (Please note that I am not talking about native lenses. What I've described is how these cameras function with non-native lenses.)

This is the third (page 3) of three posts about how I use the Sony flash features and capabilities.  The first post about the a6000 flash feature is here and the second post is here. Please read those posts first because in them I described the very nice way (in my opinion) the Sony flash firmware on the a6000 (and at least the NEX-5R and NEX-6) works with my preferred ISO setting: Auto ISO.

All of my flash use is with the in-camera flash or with a flash mounted on the camera, almost always being bounced. I have not done any remote or triggered flash as that is currently both beyond my knowledge base and beyond my interest.

The Nissan i40 is a small but highly capable flash which is also available for other camera brands.  It operates in various modes but my interest is in TTL and manual modes.  It also provides flash for high speed sync should you be using the flash for fill-in on bright days outdoors.  However, the high speed sync only works in manual mode.

To get an idea of the diminutive size of the i40, I have pictured it here with an Olympus FL 36R and a Metz 50 AF-1 flash.  [Incidentally, both the Metz (my copy is programmed for Olympus cameras) and the Olympus work just fine on the Sony when operated in manual mode.]

For the baby pictures that follow, I rotated the flash head 120 degrees (4 clicks) to the right or left, depending on where I was standing relative to the natural light coming through the lightly veiled windows at the hospital (where baby Evan was born the day before). This allowed me to use flash without any direct flash on the baby's face.  I also elevated the flash head to 45 to 90 degrees above horizontal depending on whether I was aiming downward toward Evan or was shooting at his level. 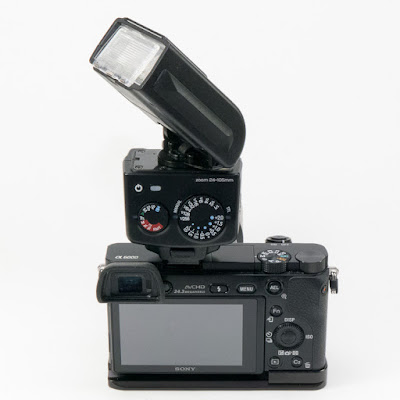 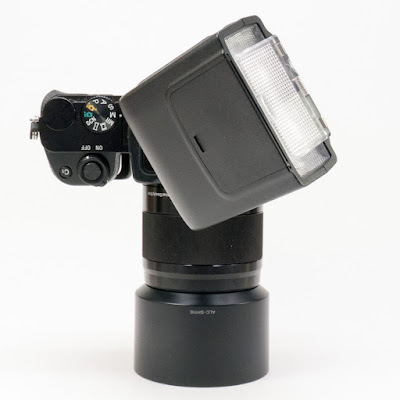 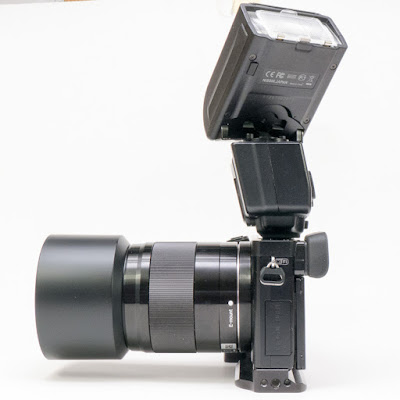 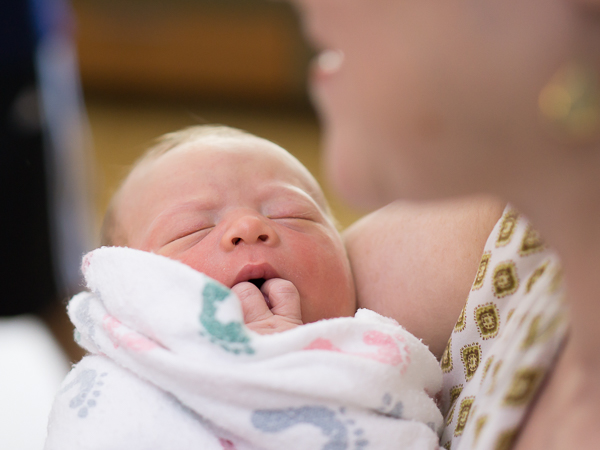 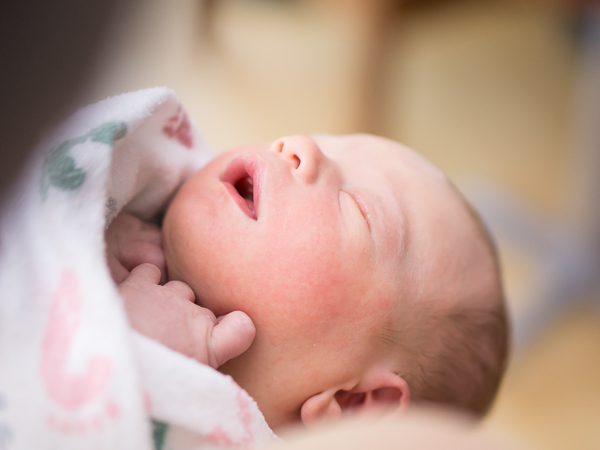 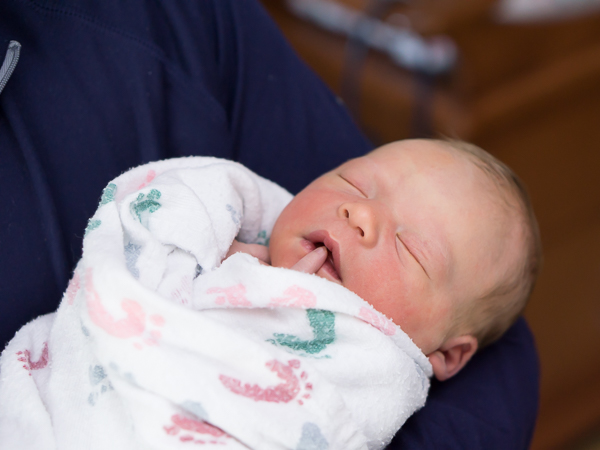