Photo Story: To Spritz Or Not?

When I first became interested in flower photography, it never occurred to me to do anything artificial to the flower.  I was amazed when one friend told me of clipping a flower with stem, and bringing it indoors to photograph without wind and with controlled light and with an artificial background (ex. white foam board or black velvet fabric).  What a great idea that was. That strategy for creating good art had never occurred to me.  Another friend told me about using a spritzer bottle in the field to add the very appealing effect of raindrops or morning dew. 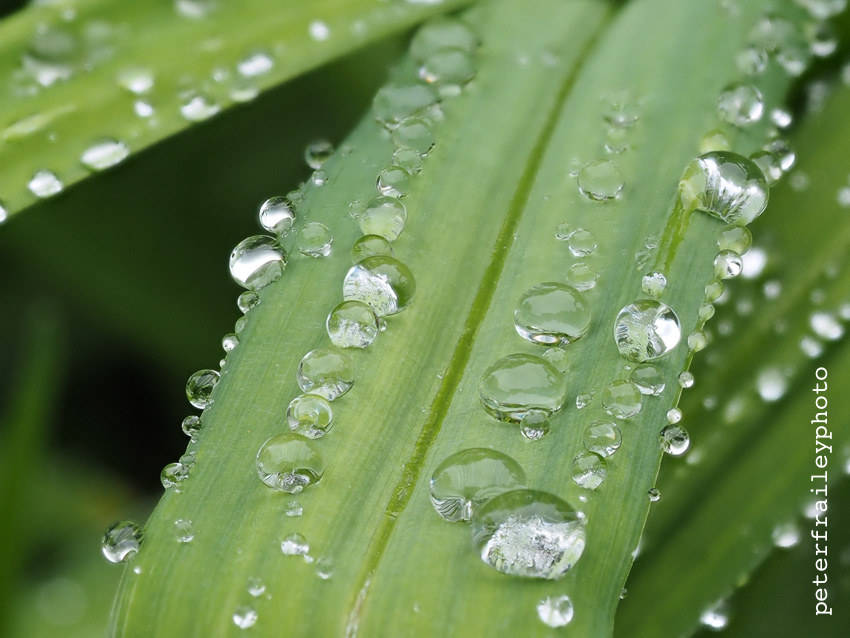 I definitely like the raindrop effect. It gives a little “something extra” to the image. But I have never actually taken the additional step of procuring a spray bottle and adding it to my gear bag.

So, this image is completely natural.  It was taken outside my home after, you guessed it, a real rain shower. Perhaps a spritzer bottle in the hands of an experienced spray bottle aficionado could duplicate the appearance, but I’m thinking that may not be possible. I love the way the raindrops have lined themselves up nicely along certain lines on the blades of grass.

I do think that during this coming season of outdoor flower photography I will add a spray bottle to my kit.  It's worth playing with, and it should add some fun. On the other hand, using it seems a bit like catching a stocked trout instead of a wild trout. The wild trout is definitely a higher quality experience. Yet, it should be said that a stocked trout is better than no trout at all!
Posted by Peter F. at 17:21 No comments: 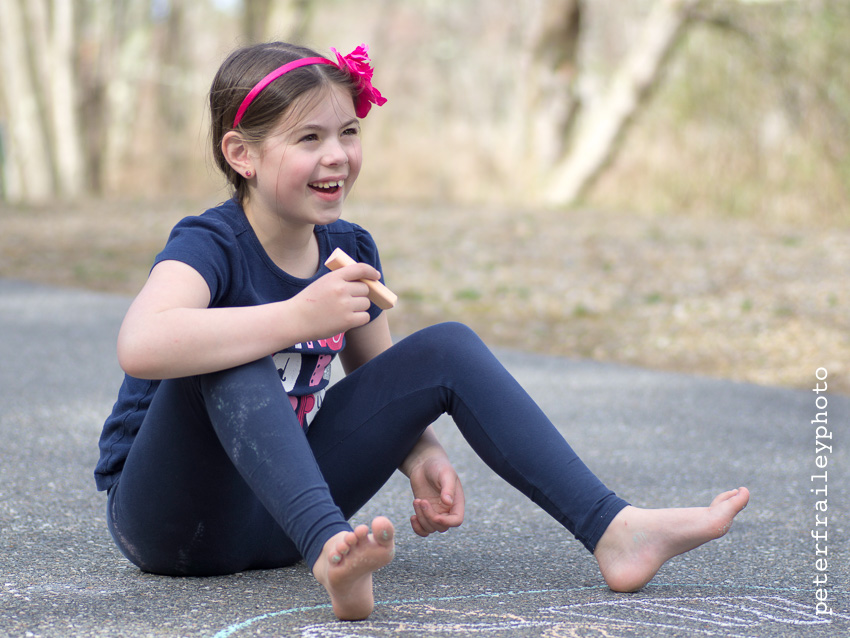 Give an 8-year old some colored chalk and a paved driveway and it’s all about art and creativity.

I think the above was the best of a ton of images I took of our granddaughter during her stay with us Monday and Tuesday. The background and foreground give a sense of the environment, without being distracting (IMO). I think that is a good thing. The 90mm F2.8 lens helped a great deal with blurring the background to help focus attention on the smiling 8 year old. Some vignetting might be useful, but I don't seem to use that technique much.  I feel I captured “the moment” here, and I especially like that it was done with an old manual focus, aperture ring manual lens. 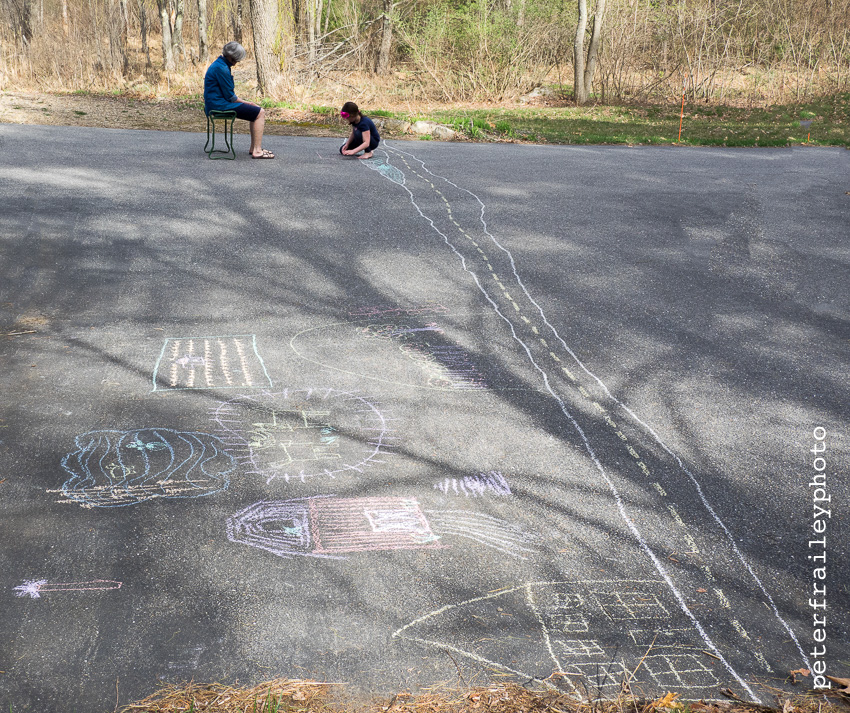 What was really amazing about this artistic experience is that we gave her the option to go to our local ice cream parlor for an ice cream cone before returning her to her parents, and she actually asked, “can I finish up my art project instead?”  Amazing girl.

BTW, buy triangular chalk sticks for your kids or grandchildren.  We’ve concluded that they don’t break as easily as the round ones. Ours are called “Chalkables”, and we just ordered more from Amazon.  The brand is OOLY.  They come in a box with 8 colors.
Posted by Peter F. at 06:00 No comments:

Gear: Best $11 Gift I Ever Received (For Macro Photography)

I saw one of these folding stools a couple of years ago at the gym.  I immediately fell in love with it and thought it would be great for my macro photography.  I mentioned it to my wife a few days before my birthday in 2015 and as I was opening birthday cards on a Sunday morning, a U.S. Postal Service truck pulled into our driveway and delivered a Rhino II folding stool!  Wow.  What a surprise.  My wife had ordered it on a Friday and with her Amazon Prime membership got it delivered on Sunday! [Apparently, Amazon is so big that it has a special deal with the postal service which includes Sunday delivery.] 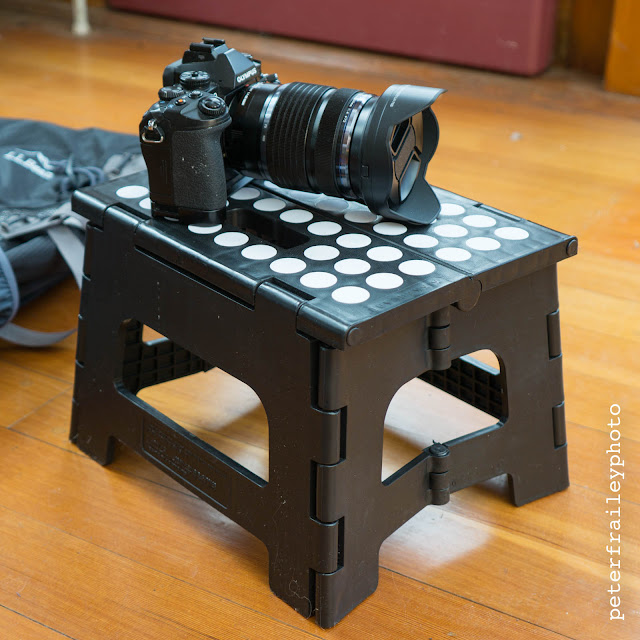 It’s called a Kikkerland Rhino II Folding Stool and they sell for about $11 on Amazon with free shipping.  The version II is sturdier than the original design so be sure to get the Rhino II model. 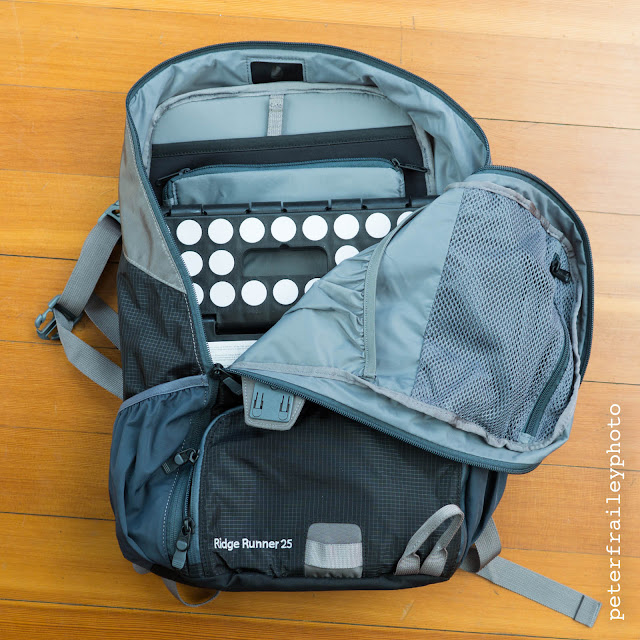 When folded, it measures about 12”x 12” x 1", so it fits nicely in my backpack.  I mostly use it for macro photography.  For me, this means either wildflowers growing in nature or cultivated flowers growing in botanic gardens.

Flowers, by their design, tend to lie low to the ground, and this stool really helps me get down to the level of the flowers without resorted to sitting crosslegged on the (often wet) ground, or getting on my knees. My joints feel a lot less “creaky” at the end of a session. It makes the process a lot more enjoyable, whether you use a tripod or, like me, avoid a tripod whenever possible.  I find the stool helps me hold the camera steady.  Often I will put my elbows on my thighs, creating a “human tripod”. 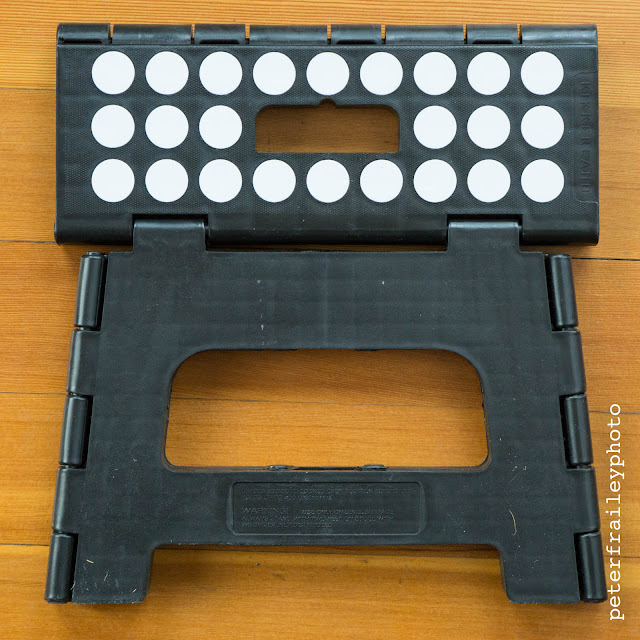 When in the field, once I have taken the stool out of my backpack, I generally don’t put it back.  When folded, It’s so easy to carry by the handle.

When not used for my photography, I usually just keep it in my car.  It takes up so little space. We now have a second one in the house.  It comes in handy for changing lightbulbs in the ceiling or swapping out batteries in the smoke detectors, and then folds up nicely to be hidden in a closet (or, in our case, between the washer and dryer).

Gear: LX100 At Discount, But I'll Wait For An LX200 (Assuming There Will Be A New Version)

When the LX100 first came out (September, 2014) I was quite excited.  All those retro dials in a smallish format.  Plus it had a mFT sensor which was pretty big for the small size of the camera and the small size of the fixed 24-75 mm-equivalent F1.7 to F2.8 (i.e. fast!) zoom. Albeit the sensor was cropped to about 12mp, but this was fine with me as it accommodated the mult-aspect ratio feature we’d come to know and love with the LX series. 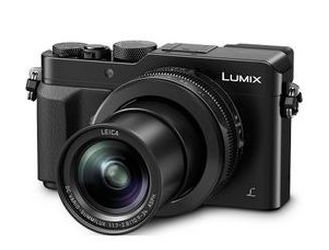 I guess what caused me to put a purchase on hold was the price tag of $899US… and to be honest, I was concerned with some of the reports that seemed to indicate some lens softness. I have to admit that lens sharpness is a “thing” with me.  Intellectually, I know it is overrated and that there are so many more important elements that go into making a good photo.  When it comes down to it, I think almost all modern lenses are “sharp enough” and fully “sufficient”, even slow kit lenses. Nevertheless, lens sharpness is always a hurdle for me.

At any rate, because of these concerns, by the end of 2014 I removed the LX100 from my radar screen.

But then a couple of weeks ago, I had another chance to reconsider.  Not only was the LX100 on sale at a trusted seller, Amazon, but they had plenty of them in stock and “more coming”, priced to sell fast at $560 with free shipping.  This was 30% below the retail price of $799 and 40% off the initial retail price of $899! Unfortunately for anyone reading this now who might be interested in buying at that price, this deal has come and gone and the current selling price at Amazon (on April 1, 2017) is $699.

Screenshot from Amazon a few weeks ago.

Currently priced on Amazon at $699: 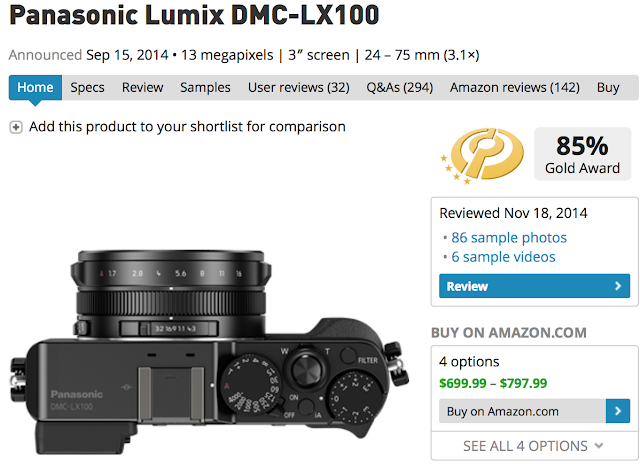 However, I was unable to hit the buy button, even at $560.  It seems that a lot has changed in my mind with regard to an appropriate feature set.  Obviously, the camera still works as well as it did when introduced in 2014, when it received an 85% “gold award” from dpreview.com.  But my wish list for features and requirements seems to have expanded over the last 2 1/2 years.  That’s not a good or bad thing, it is just what is.

In passing up on this sale, I also considered that perhaps the heavily discounted price was a sign that a new model (LX200?) is coming.  I am hoping that the LX100 was successful enough that it warrants an upgrade.

What would really kindle my interest in the next version of the LX100 (if there is one coming along) is one or more of the following “improvements”, listed here in order of my interest:

(1) A bigger EVF, preferably OLED so I can see through it with polarized glasses.  The bigger EVF can be accomplished in appearance without increasing the physical size by changing the EVF to a 4:3 aspect ratio instead of the current 16:9. I understand that the GH series has an OLED viewfinder with 4:3 aspect panel.

(3) Better image stabilizing. Gordon Laing was disappointed to find in his review on cameralabs.com that the stabilization system only provided a 2-ish stop advantage where he’d expected more like 3-4 stops.

(6) A 20mp sensor ...which would need to be cropped to about 15mp to accommodate the multi-aspect ratio feature.

(7) Blue Tooth for easy fast transfer to my cell phone for sharing. (I don’t have any cameras with this, so not exactly sure how advantageous this is… but it seems to be the direction upscale cameras are heading)

I guess that's a healthy list of "improvements".  I'm looking forward to seeing what Panasonic comes up with next.