Tuesday was a good day to play hooky from work and spend the morning at our local botanic garden with my "new" old Minolta 100mm macro. I have had it a few weeks, but this was the first time we'd gone outside to play. 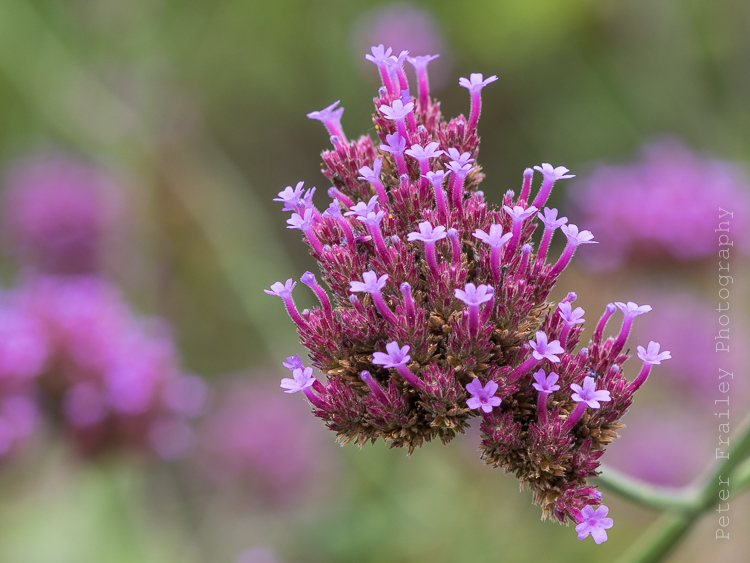 I was hoping for more flowers at the garden, but it is late in the season.  Many of the flowers looked a bit well-worn.  On the other hand, we've had little rain this summer so expectations should be kept realistic. 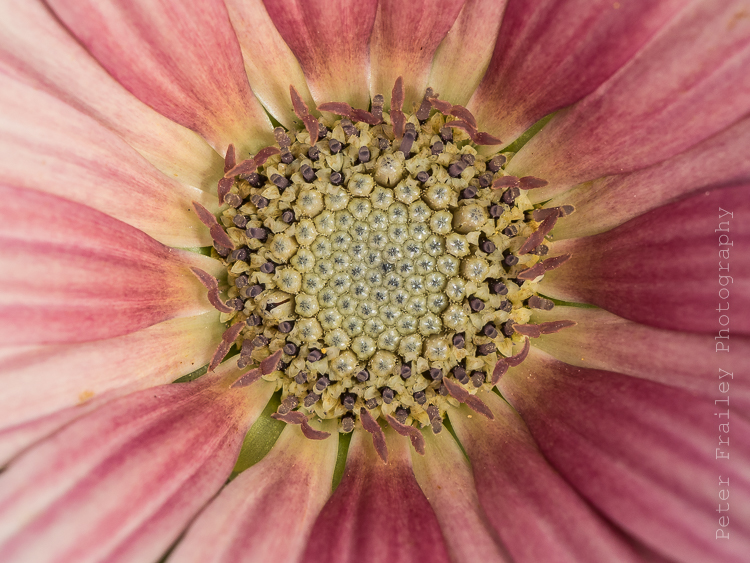 The Minolta is a heavy lens weighing in at 22 ounces. That's a whopping 25.5 ounces with adapter!  But I lugged it around on the E-M1 for 2 1/2 hours and didn't feel that it weighed too much.  In fact, I had the Olympus 36R flash in the hot shoe the entire time too; although I used the flash perhaps only 1/3 of the time. 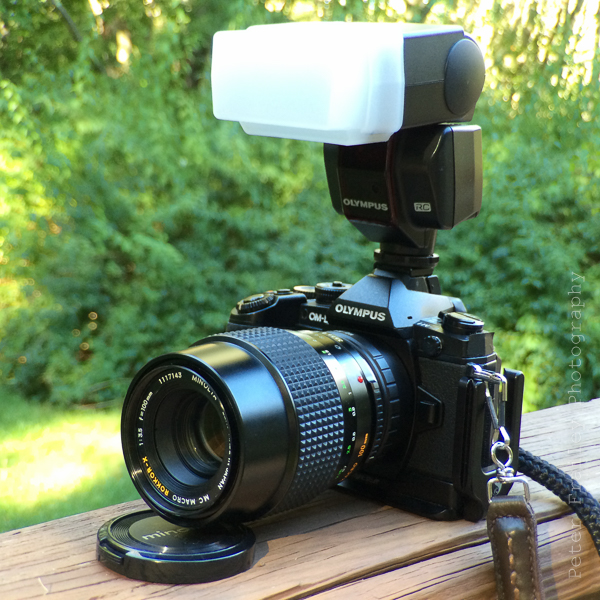 I used a small "kiss" of flash with these four: 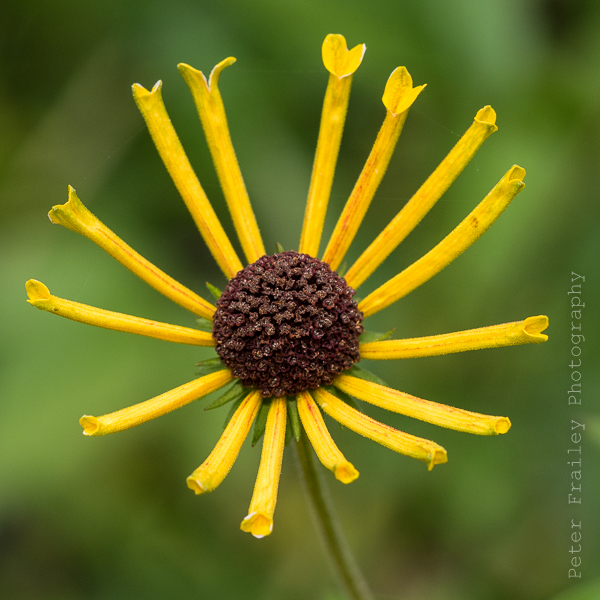 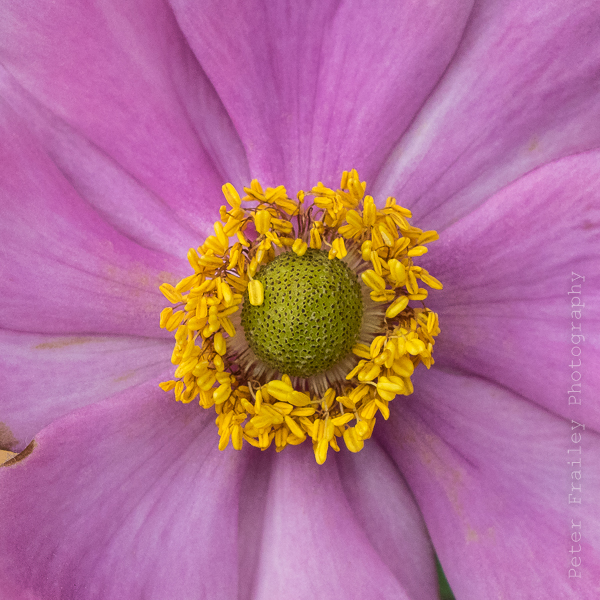 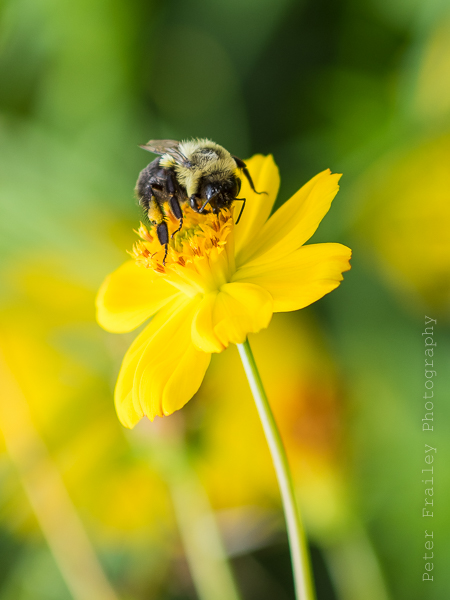 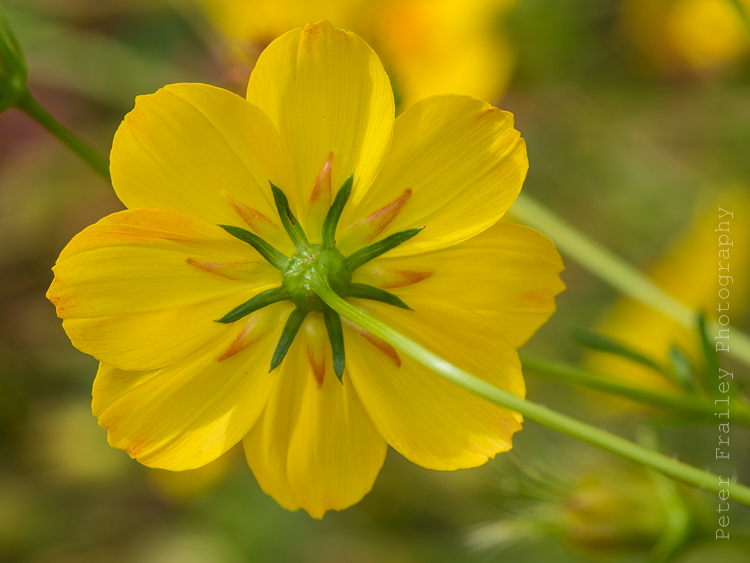 All my shots were hand held at 1/250 sec or more.  This lens has an effective focal length of 200mm.  All the formulas suggest that for this focal length a shutter speed of 1/250sec should be fast enough to remove camera shake.

I left in-body-image-stabilization on.  Some might argue that I should have turned it off because it was unnecessary at that shutter speed. 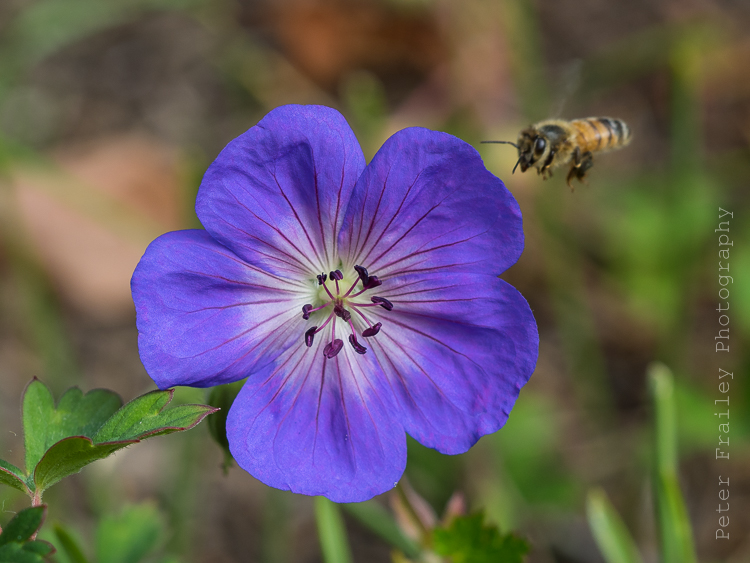 I switched back and forth between F4 and F8.  Both F stops seemed sharp. I believe the lens is sharper on the E-M1 than my two other manual lenses of similar focal length, the Nikkor 105mm AI-S F2.8 and the Tamron 90mm F2.8. I was pleased also to see no CA, a problem that I find on both the Nikkor and Tamron. 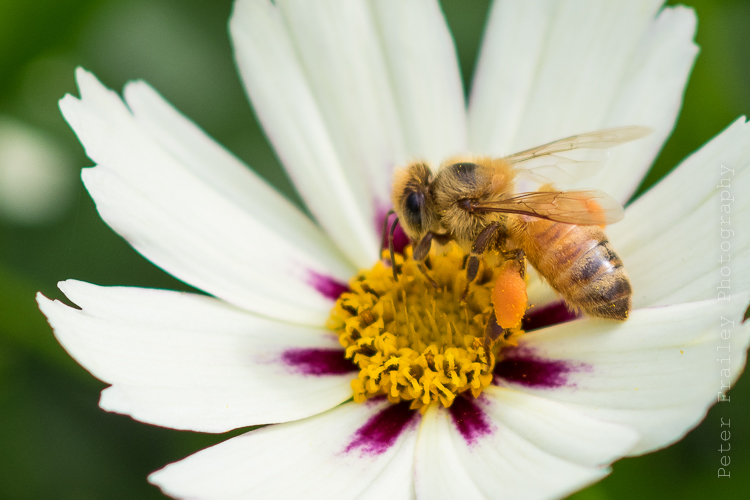 Focusing was a challenge, even with the focus aids in the E-M1.  These focus aids work almost the opposite of those on the Sony a6000, so I am looking forward to trying my hand at that combination in a few days. 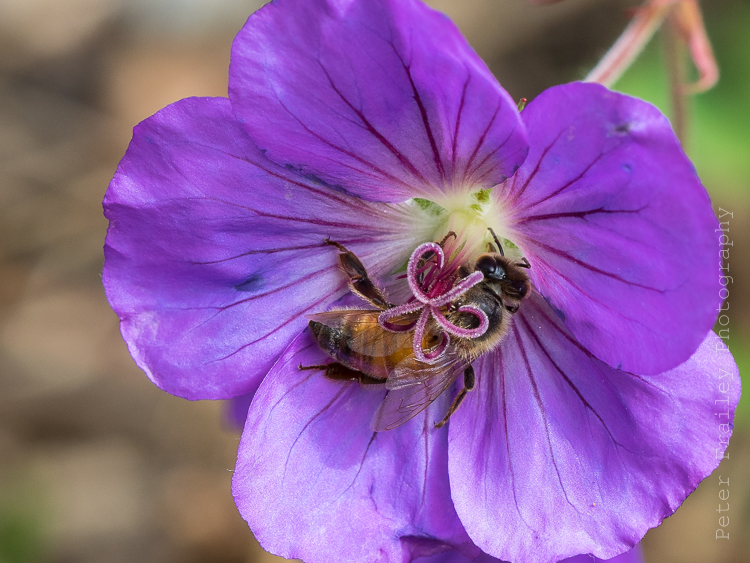 Here were my two focusing challenges:

a) I find that the Olympus focus peaking is not selective enough to be accurate for macro work.  For example, if shooting down at a 45 degree angle onto the horizontal surface of a flower, I might see a speckled band of white (the focus peaking is set for white) 1/4" wide across the flower, supposedly highlighting that which is in focus.  Yet the actual depth of field, where sharpness is adequate, might only be expected to be 1/16" or 1/8". One would surmise that the middle of the 1/4" band would be the sweet spot; however, I often found that the sharpest "plane" of focus was slightly behind where I intended it be.  Perhaps with more experience and practice I will make some mental adjustments and get the focus on target more frequently.

b) As soon as you half press the shutter the peaking disappears.  Perhaps not a problem with a landscape, but I find with macro work that there is too much operator time-lag between focusing and full release of the shutter. 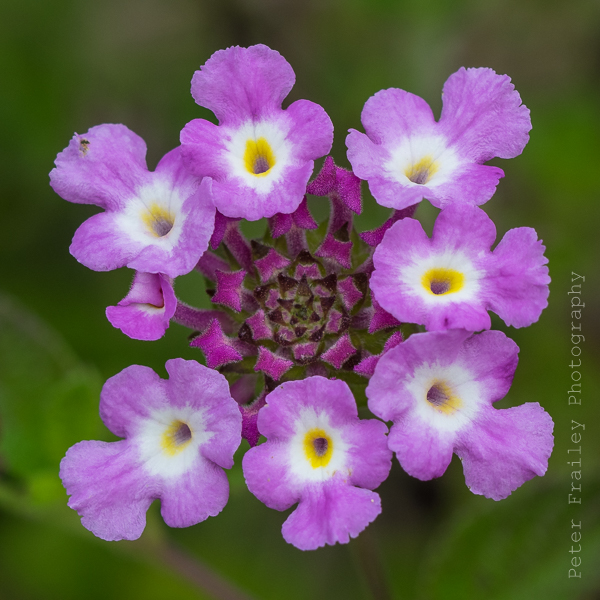 Now that I have purchased (for a reasonable price on eBay) my third manual focus Minolta lens, I feel I officially have a "collection".  This assumes I am allowed to call 3 or more of anything a collection!

Seen below are, left to right: 100mm F3.5 macro (newly acquired), 50mm F3.5 macro, and 35-70mm F3.5 macro zoom.  Also pictured below are the adapters (about $20 each on eBay) that allow me to use the lenses joyfully on my two mirrorless interchangeable lens cameras, a Sony and an Olympus.

In addition to making nice images (with limitations due to old technology and being designed for film), I have "collected" these lenses because they look and feel great.  The focus rings are smooooth and the lenses are all metal. 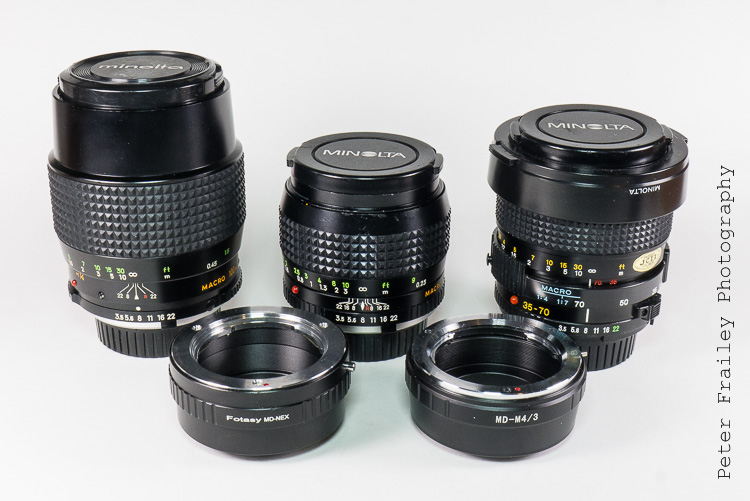 I love all the markings you find on the lens barrels as you focus (or zoom on the 35-70) and the lens telescopes out..., although other than the distance scale, the f-stop, depth of field scale, and the focal length adjustment on the zoom lens, I frankly don't know what some of the other markings mean.  One guess is that some of them relate to light gathering adjustments that are made as focus changes. Since I use a live histogram on the camera all the time, I don't really need the information on the lens barrel to make EV adjustments. Other markings are clearly related to magnification ratios at different focusing distances. 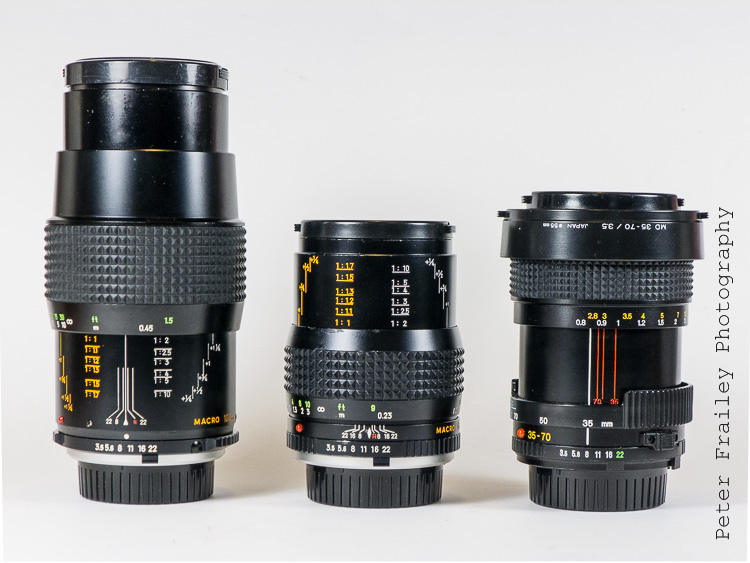 I received some additional information by email from my friend Dennis Mook.
Dennis first owned Minolta gear in 1971 and still has the Minolta SRT-101 camera plus Minolta Rokkor 55mm F1.7 lens it came with.

Here is what he writes about the various markings on the lenses:

As far as your lenses, on the zoom, the red lines reflect where one would correctly focus the lens if one were using infrared film.  Infrared light focuses in a different plane than visible light.  The three lines reflect three different focal lengths.  So what you would do is to focus the camera thought the lens, then move your focus point over to the appropriate red line, depending upon the focal length in use.

On the macro lenses, the white markings reflect magnification of the image when using the lens alone.  As you can see, it only focuses to 1:2, or half life size.  Minolta also made an extension tube so the lens could focus to life size, or 1:1.  The markings off to the sides are the required exposure compensation for different magnifications.  When these lenses were manufactured, almost no camera automation existed. The rule of thumb that I remember was you had to open up two stops for a life sized or 1:1 magnification.

The curved lines are depth of field scales (for 35mm sized film or sensors; they won't apply to other sized file or sensors) for pre-focusing and/or zone focusing.

Check out Dennis' wonderful photography blog at www.thewanderinglensman.com and/or his Web site at www.dennismook.com)

One of my favorite things to capture "on film" (I don't use a film camera any more, but I can't think of a digital equivalent... "on sensor"?) are landscapes with bright blue sky and puffy clouds.  Add water to the mix and compositions (at the correct angle to the sun) will scream for a polarizer.  In fact, I've been finding that if I have blue sky + clouds + water (or any two of these three), I just leave the polarizer on.  In such a scenario there's always enough light not to worry about the polarizer blocking one or two stops of light.

The images below were all taken with a polarizer and all but the stone tower were taken at ISO 200 (base ISO on the E-M1).  The stone tower was mistakenly shot at ISO 1000 which was entirely unnecessary.

Pursuant to my last post, I find that only 5 of the 16 images below were left "untouched" at the Olympus' native 4:3 aspect ratio.  The other 11 were cropped to 3:2, which is my preferred aspect ratio for landscapes.

Email ThisBlogThis!Share to TwitterShare to FacebookShare to Pinterest
Labels: maine

An hour-and-a-half during one morning in Maine

I smiled as I wrote this title because all the pictures below were taken within a couple of miles of the grocery store that is featured in Robert McCloskey's children's book One Morning in Maine.

On a recent vacation trip I woke up early each morning (well, almost each morning) to walk, coffee in hand, down to the rocks below our cabin at the edge of Penobscot Bay.  Each morning was different but all the sunrises were awesome.  However, there was really only one morning where I thought the images I created had any "wow" factor to them.

On this one particular morning I spend most of an hour and a half sitting on the rocks below the cabin, going back to the cabin a couple of times to chat with my wife, who was watching the morning unfold from screen porch, and to refill my coffee mug.

The fun thing was watching the morning develop.  The sunrise itself was not that spectacular, but it was the fog coming in that was so interesting to watch.  Maine is one place where you can have fog on a sunny day!  Add a lobster boat and a row boat to the scene and my interest was peaked.

All were taken with an Olympus E-M1 with either the legacy FT 14-54ii zoom or the mFT kit 40-150 zoom.  Usually I crop landscapes to a 3:2 aspect ratio, but a greater number than usual were left at 4:3 to capture some additional blue sky to juxtapose with the fog. 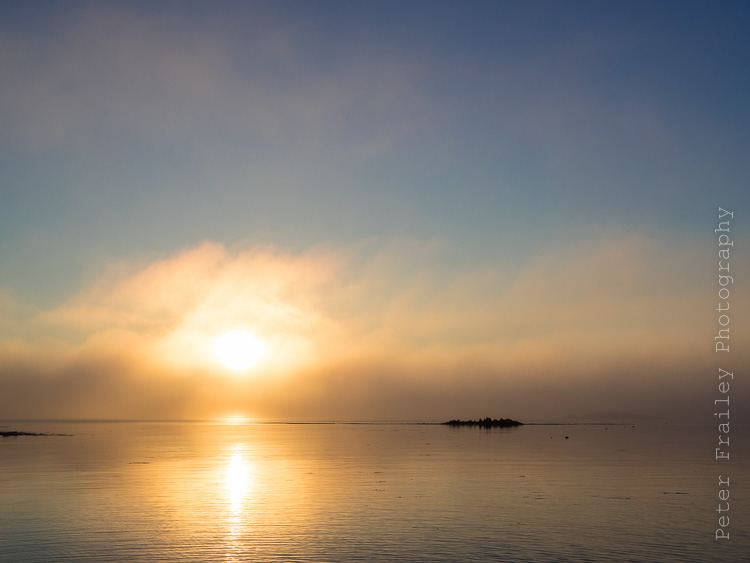 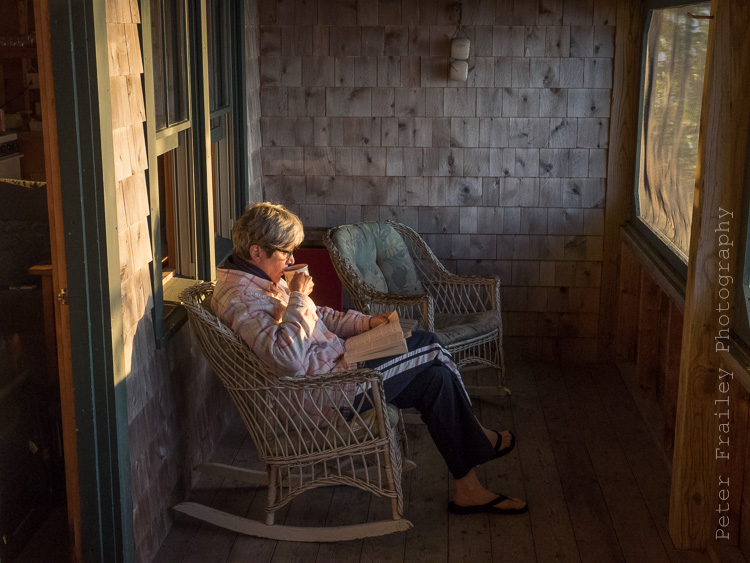 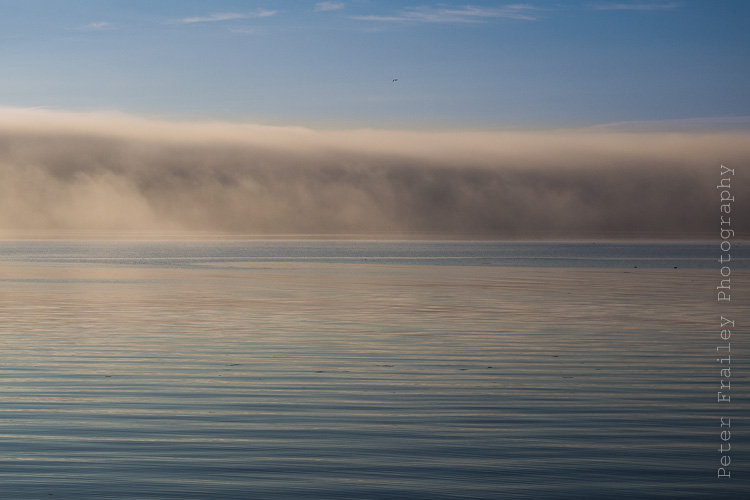 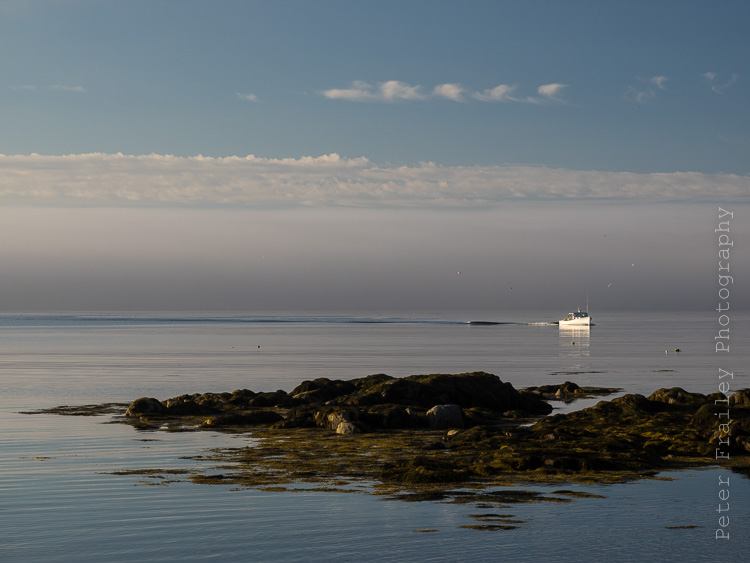 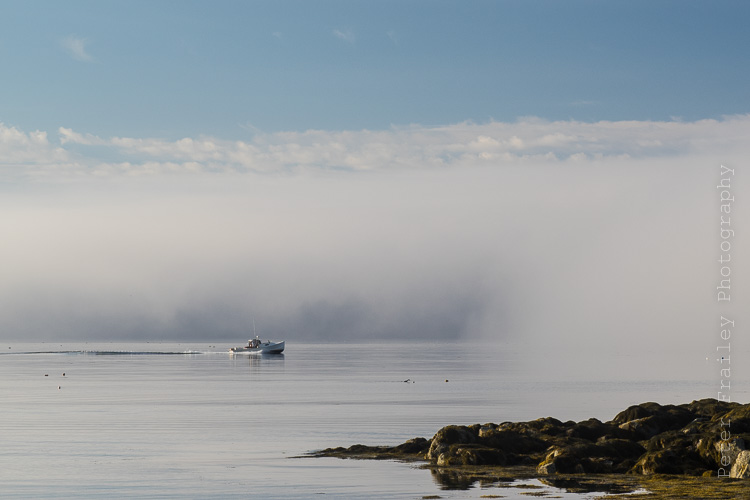 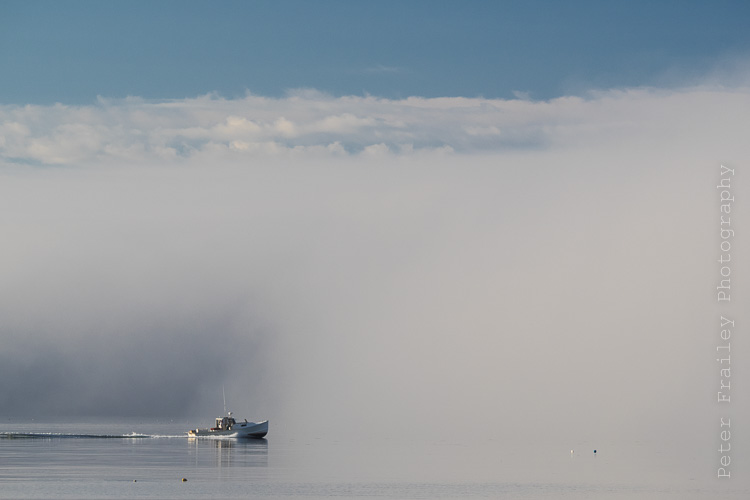 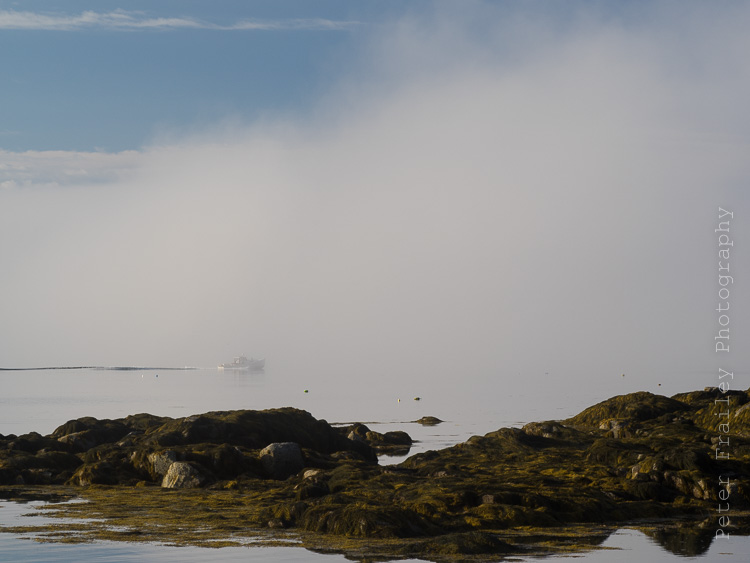 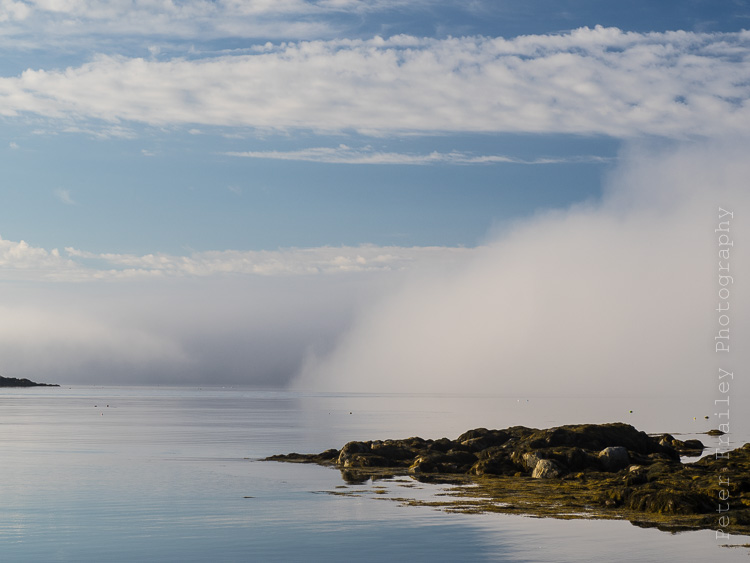 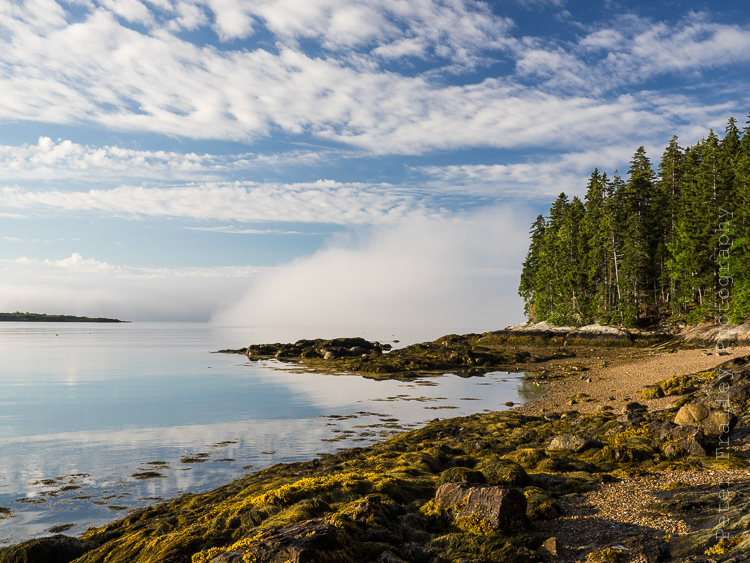 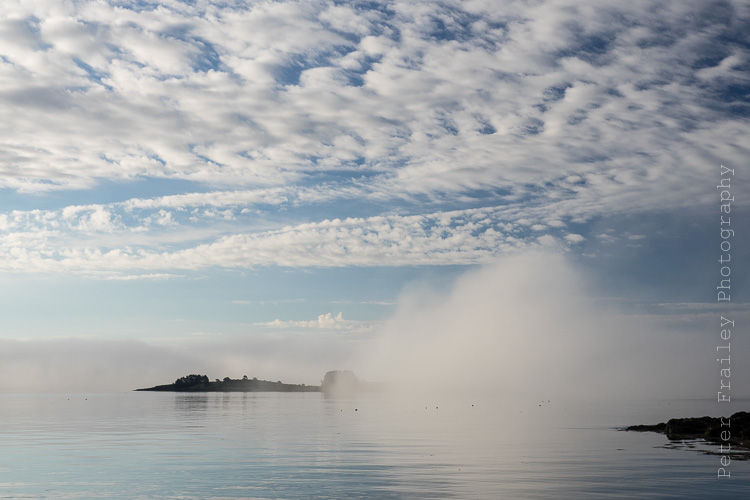 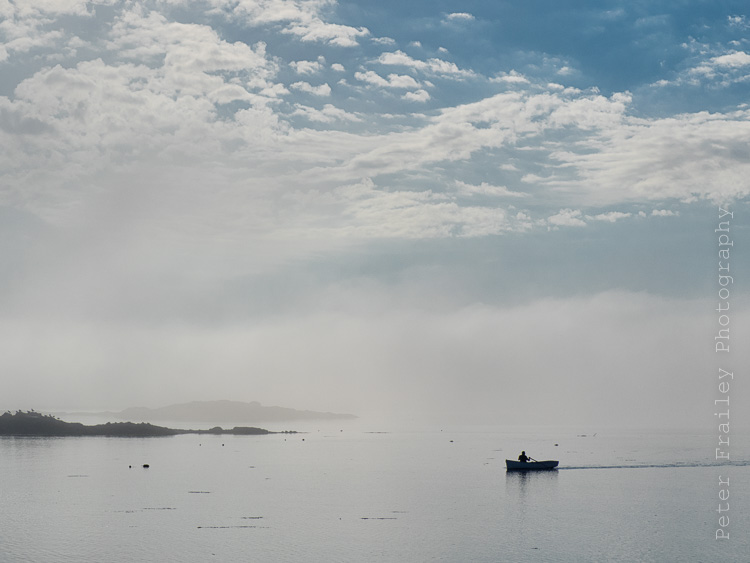 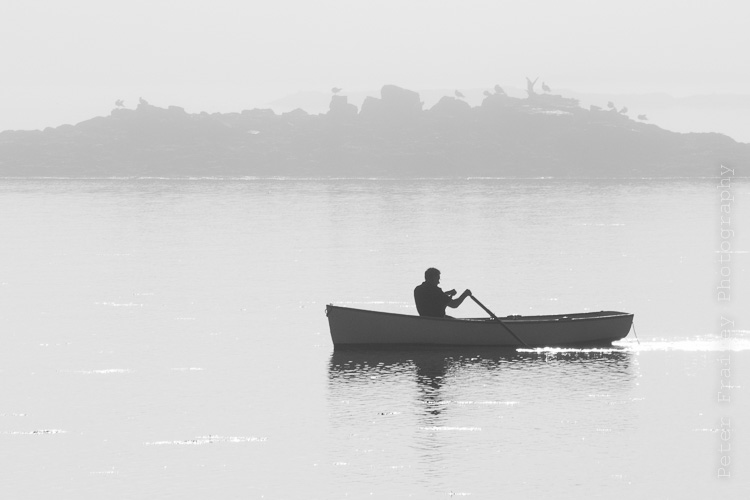 Email ThisBlogThis!Share to TwitterShare to FacebookShare to Pinterest
Labels: maine

I guess now that I'm writing part 6 of this little series on the reasons I prefer the a6000 I should mention again that I can also write a series of posts (and I do plan to do that) as to why I prefer the Olympus E-M1 over the a6000.  Both cameras have their advantages and disadvantages.  And both have reasons to prefer it over the other.

Below I have written about my Olympus images from a June trip to Prince Edward Island, Canada. I didn't bring the a6000.  That's because Olympus has one big trump card... LENSES.

Although I used the Olympus E-M1 on this trip, the camera unfortunately (in my opinion) has a 4:3 aspect ratio.  This is what most point and shoot cameras and my iPhone have.  It's a bit squarer than the 3:2 aspect ratio of the Sony a6000.  The 3:2 ratio is the standard format on dSLRs and film SLRs. For travel photos I prefer the 3:2.

The other night I uploaded a set of favorites from the PEI trip to my Web site. If you are interested, please take a look here:
http://www.peterfraileyphoto.com/pei2015

I noticed in this batch that although there were 25 landscape-oriented images from my Olympus, I cropped 20 (80%) of them to 3:2, and two of them were cropped even narrower, to 2:1.  It's too bad to waste the pixels, but the cropping improves the composition in my opinion... or I wouldn't have done it.

I like what you get from the a6000.  With its native 3:2 ratio and 24 mp sensor with resolution of 5059 x 3373, one can employ the full 24 mp when capturing a landscape at 3:2.  This is quite a bit more resolution than what I am getting with the Olympus. Combine this with the fact that each pixel from a 24mp APS-C sensor is slightly larger than each pixel from a 16mp mFT sensor, you can see that the Sony provides both more and larger pixels. I am not sure this makes a difference to the human eye, but all things being equal more and bigger pixels is a good thing. 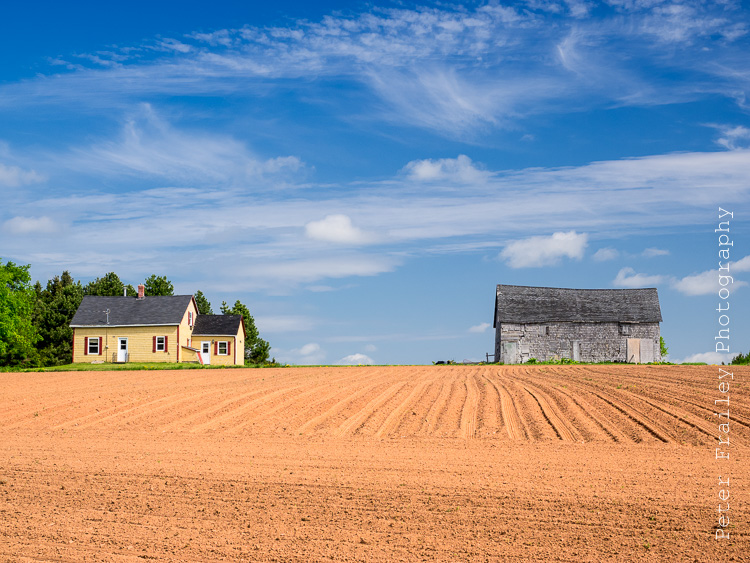 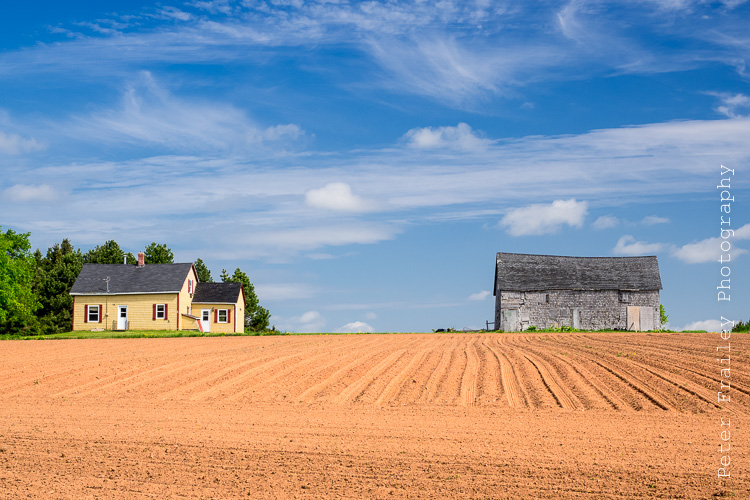 4:3 (the result of some recent fly tying) 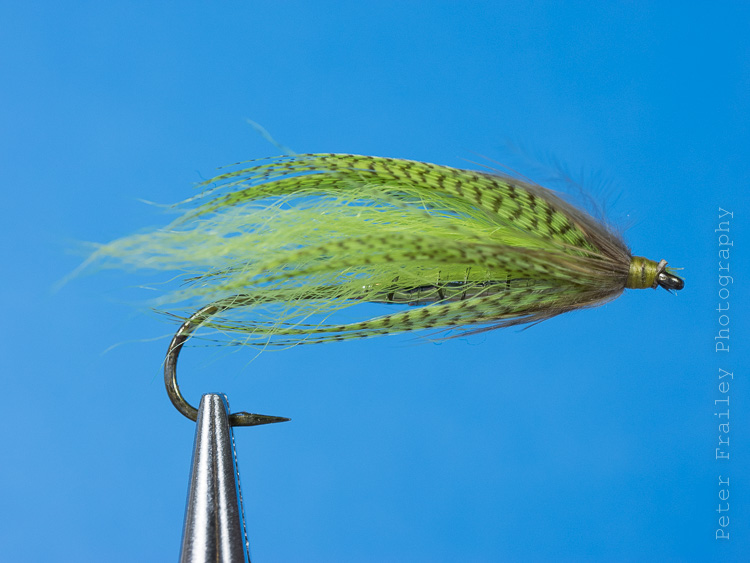 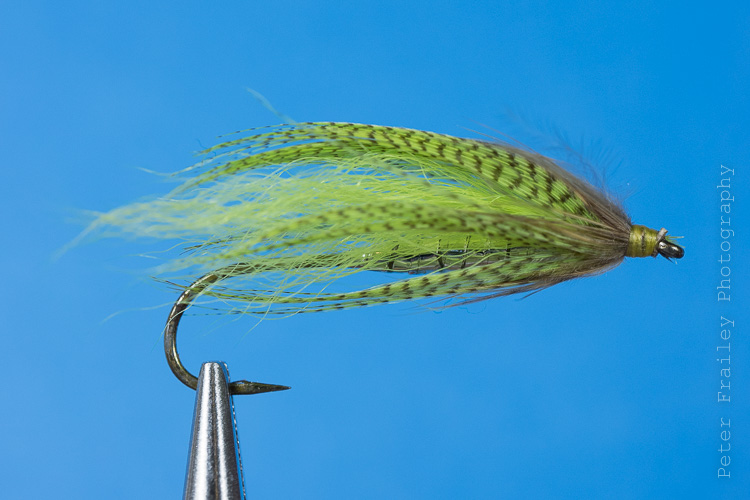