Another Black and White, Sunwapta Falls

After posting a few black and white images the other day (prior post), I found this shot of Sunwapta Falls in Alberta, Canada in my summer vacation folder and decided to convert it to black and white.  I like the result. 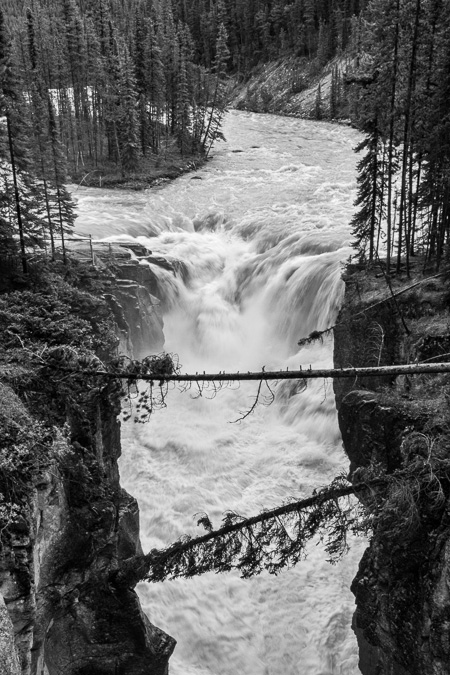 I do wish the fallen tree in the middle weren't there.  My photoshop skills aren't at a level where I can remove this, though I might just for fun see what the "content aware" tool in Photoshop CS5 will do.

The fallen tree at the bottom has more character and does not interfere with the main part of the waterfall.  Or, does it?  Maybe it, too, is distracting?

I dislike having that first tree in the middle so much that I created a second crop where I was willing to nearly eliminate the bushier tree at the bottom just so I could at least move the top tree away from the center of the image and into the 1/3 position.  I find it less distracting there. 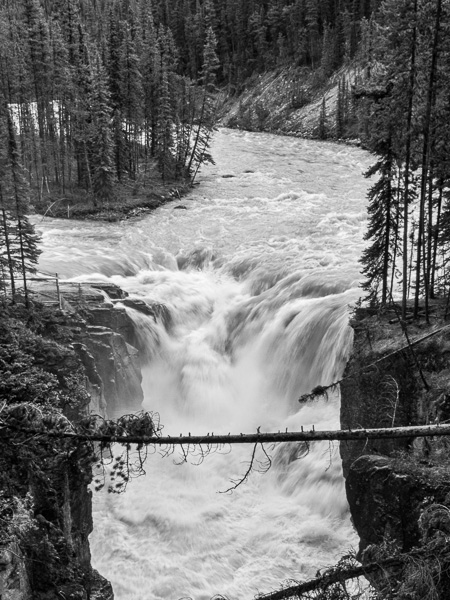 Nevertheless, I haven't decided which of the two I like better.  Note that the first image is a 3:2 aspect ratio image and the second one is 4:3, just a bit "square-er".

Either way, I do like the exposure.  I haven't mastered the "soft" waterfall look mainly because I don't like tripods, and a very slow shutter speed is required.  However, in this case, using shutter priority I set the camera at 1/15th second and held the camera on top of a wood railing on the bridge on which I was standing.  Base ISO on this camera is 200 and the camera chose F22.  If there had been any more light, I would have been out of luck as F22 is the smallest aperture on this lens.  I do have a Neutral Density filter but not for the 67mm threads on this Olympus 14-54mm lens.

A neutral density filter would have allowed me to try an even slower speed, such as 1/8th.  Thinking back to this scene, I should have tried 1/8th anyway.  Though it would have resulted in a slightly overexposed image, the various adjustment sliders in Lightroom might have helped me pull back the exposure of the brightest areas.

Email ThisBlogThis!Share to TwitterShare to FacebookShare to Pinterest
Labels: black and white, west 2012

A few black and whites from the Canadian Rockies

I've been trying to find some photographs from our Canadian Rockies trip last June that will convert nicely to black and white.  It is very hard for me to determine what will look good... until I try.
﻿

"Trying" is easy in Lightroom.  First I make sure that the "Navigator" feature is open.  It is located at the top of the left hand panel.  Then, below the navigator, is the "Presets" feature. I hover the cursor over the various "Lightroom B&W Filter Presets" and watch how the image in the Navigator changes. If the image has potential, I then create a "Virtual Copy" of the original color image and click on the preset to apply it to the virtual copy.  You can then tweak the various sliders on the right hand tool panel to see if you can improve on the preset defaults.  Sometimes I can, sometimes I can't.


﻿﻿
I think all of these images were taken on  rainy, cloudy, and/or foggy days.  It is my experience that dramatic skies come across well as black and whites.  Another thing about drab days is that the colors are rather muted (boring?), so converting to black and white makes sense.

﻿
All of these were taken in RAW format with either a Panasonic GH2 (since sold) or an Olympus E-M5.  The lens was always the Olympus 14-54II attached to the camera via a 43-to-m43 adapter.

Bottom line: My clear preference for this legacy macro lens is the Olympus E-M5 body.  This is not because of any difference in image quality, as they both do a great job.  But the preference is because of what I believe is Olympus's better handling characteristics, at least when shooting macros.

The NEX-6 has only a couple of potential advantages as I see it.  First is "focus peaking" which helps the process of manually focusing a lens.  But when shooting flowers up close it works inconsistently.  I find it works well when focusing on the edges of petals.  But not so much when trying to focus on the stamens of a flower.  The petal edges usually have sharp edges against a blurry background.  Here the focus peaking works.  But mid-tone yellow stamens, for example,  against a background of mid-tone green petals makes the peaking ineffective.

A larger sensor usually translates into better high ISO image quality. I am usually shooting macros at a shutter speed of 1/200th and at F8 or F11, and this often requires higher ISOs (such as 1600).  But to be honest, I just don't see a difference in image quality between the two cameras.  Perhaps a difference would be noticed in very large prints, perhaps over 20", but with macros I don't think I've ever printed anything bigger than 12" on the long side.


Now let me move to the Olympus:

I own the accessory battery grip for the E-M5, and this helps immensely when shooting with the 105mm lens.  That's because the lens with adapter weighs 21 ounces.  With the grip, you can hold the camera body with all four fingers (not just three fingers like on the NEX-6, or the E-M5 minus the grip).
I also feel an extra level of camera stability with the E-M5 because the EVF is in the middle of the camera body, while it is on the left (rangefinder style) on the Sony.  I realize that the center EVF causes me to press the camera against my nose, but this makes for a more stable platform.  (Note: I have a big nose!)

And finally, with regard to stability, Olympus has an in-camera stabilization system that will work with any lens.  Though I generally shoot macros at a safe shutter speed of about 1/200th second, so far I have left image stabilization "on".  Don't forget to make the in-camera adjustment necessary to let it know the focal length of the legacy lens being used.

Now, here is where Shutter Priority pays off.  And that's because I have a preference for Auto ISO.  I want to pick the shutter speed and aperture with this lens and then I'd like the camera to give me an accurate automatic exposure by adjusting the ISO accordingly.  When it works well, I can move around the scene at different angles and the camera will give me a nice exposure by moving the ISO up or down as the light changes.  The reason I wrote "when it works well" is because I believe both cameras have trouble with finding the correct exposure in shutter priority mode with old lenses.  But this has been more the case with the Sony, as I find I nearly always need to use EV compensation, sometimes 2 or 3 stops.
﻿

First, with both cameras, and with legacy lenses attached, the Shutter Priority forces EV compensation to effect ISO only.  It has no effect on shutter speed or aperture.

Unfortunately, adjusting EV compensation is not an easy process on the Sony.  I have to hold the camera away from my body so I can look at the buttons.  The EV button is the "down" button on the 4-way controller.  This takes you to another screen without a histogram to watch.  The new screen shows the EV choices in 1/3 stops.  You then rotate the rear dial to add or subtract exposure.  It will change the ISO, as I mentioned above, but you do not have a histogram to view while making the changes.  (This I understand is not a problem on the NEX-7.)  After inputting the EV compensation amount, you can half press the shutter button to get back to the original viewing screen.  Only then will you see the effect on the histogram.

I much prefer adjusting EV compensation on the Olympus because you never need to take your eye away from the EVF because the adjustment dial is the front dial that surrounds the shutter  button.  As you turn the dial with your first finger, ISO is adjusted and you can watch the change right there on the histogram shown on the EVF.  (That assumes you have the histogram activated in the menu... I always have mine on.)


The Advantage of Olympus's Smaller Sensor:
For macros where you want more depth of field, the smaller Olympus sensor has an advantage. Using the same 105mm macro lens on the smaller-sensor Olympus and the larger-sensor Sony means that to similarly compose the same image,  I have to stand a bit further back with the Olympus.  This is because at the same focusing distance the Olympus sensor would only capture the center (approximately 3/4th) of any image that would be fully captured on the Sony sensor.

So how does this effect depth of field?

Because I need to be further from the subject when using the 105mm on the Olympus, this actually decreases the magnification and therefore increases the depth of field.  This makes sense when you think that the smaller sensor in effect increased magnification (by cropping the outside of the image when compared with the larger sensor on the Sony) when focusing at the same distance, and the only way to make things "equal" is to compensate by decreasing magnification by moving further from the subject.

What then is the advantage?

The advantage is that the Olympus is letting in twice as much light at F5.6 as it would at F8.  This then allows me to shoot at one-stop lower ISO (If the Sony needs ISO 1600 at F8, I can shoot the Olympus at ISO 800 at F11).  All things being equal, lower ISO will result in a higher quality image!

On the way home

As I was driving home from work yesterday afternoon I found it hard to keep my eyes on the road as I watched this sky color develop.  It was very close to sundown.  I kept looking for some place to pull off the road, but I could find nowhere where I could get a clean shot.  I wanted to capture not only the blue sky but to capture the cloud bank with its very abrupt demarcation line.

When I couldn't stand waiting any longer, I pulled off into a boat landing along the Concord River and captured this shot.  I shot vertically to capture the sky.  There's a bit of ice on the water.

The image was taken with the Canon S90.  It's not my favorite point and shoot camera but it's small and I keep it in my briefcase.  As they say, "the best camera is the one you have with you."