In my prior post I mentioned the advantages of image-taking during the golden hours.  On the other hand, this is rather limiting when you are traveling.

All of the images below were taken mid-day.  I took them mid-day because that is the time I was there!

I love blue sky and puffy clouds and the sky is often its blueist mid-day and when the sun is at your back.  But you need to watch your exposure.  The white clouds are easy to overexpose, and they will look like featureless white blobs.

A strategy for dealing with this is to use a bit of "exposure compensation" (perhaps minus 2/3rd of one stop) to retain the detail in the clouds. Even the simplist cameras will often have this feature, often referred to as EV compensation.  Usually you will have a button or a menu item that is written as "+/-". Adding "+" numbers will result in a brighter exposure. Adding "-" numbers will reduce the light and make the overall picture darker or less exposed.

By adding -2/3 EV compensation the clouds will look better, but the shadows in the foreground will get darker.  This is not necessarily a bad thing.  But if you want to fix it, a bit of "fill light" in processing software like Adobe Lightroom can often help.

I'm not sure I was entirely sucessful in these shots, but I don't think the clouds are noticeably "blown out".


__________﻿
The next three images were taken at Colonial Pemaquid State Historical Site, and the site of Fort William Henry that was originally built in 1692 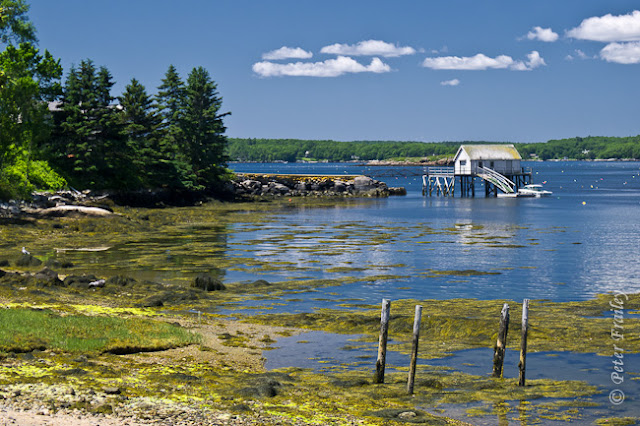 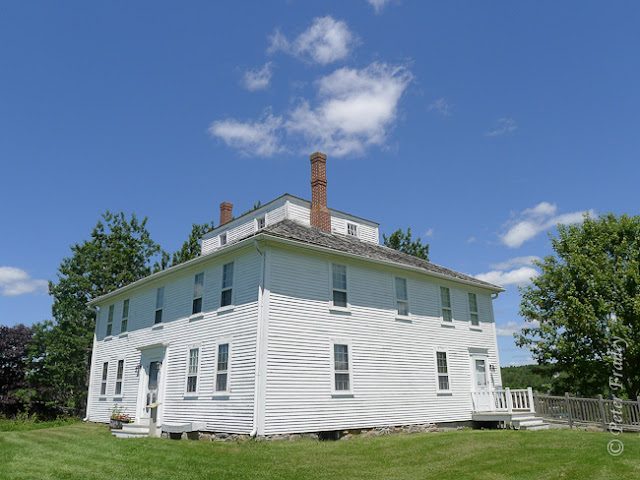 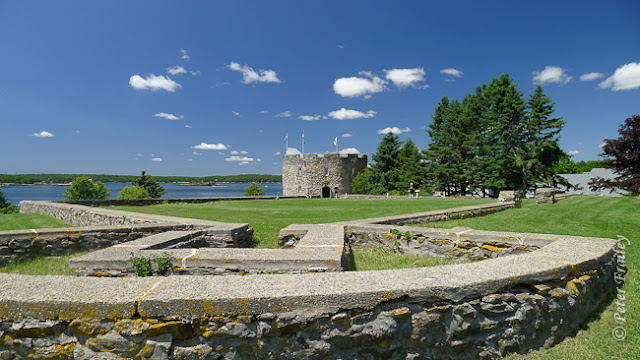 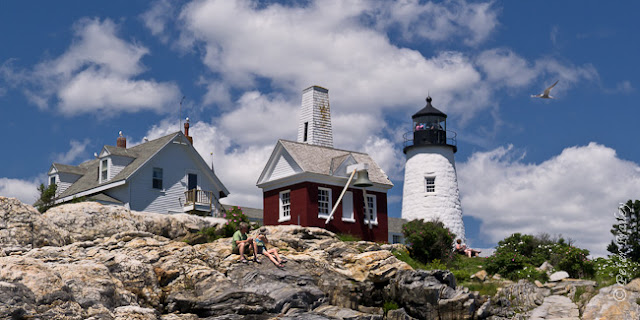 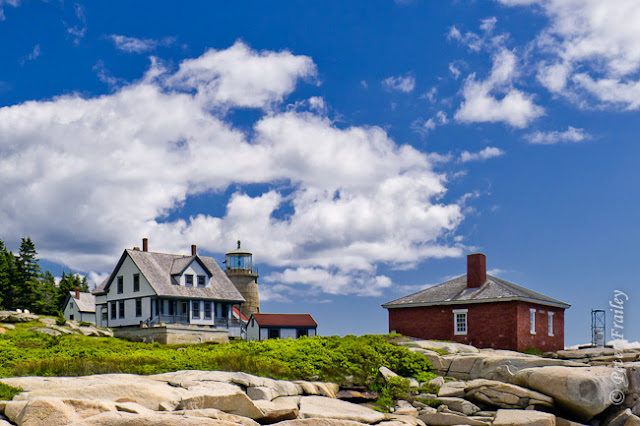 Birch Point Beach State Park.  Beaches up there are never crowded... it seems; though this was taken on Thursday, June 30th, just before the long 4th of July weekend. 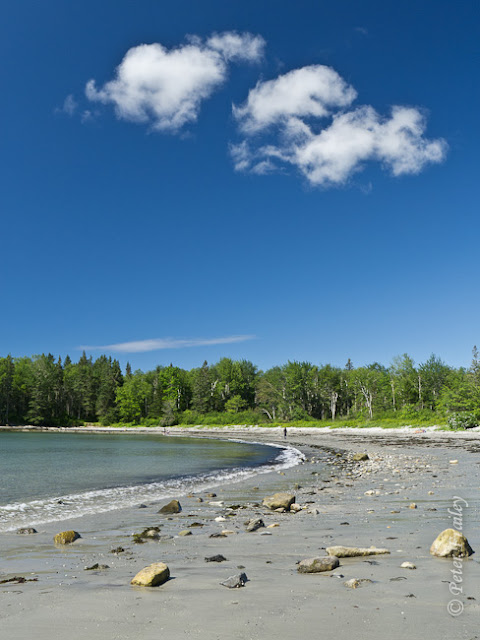 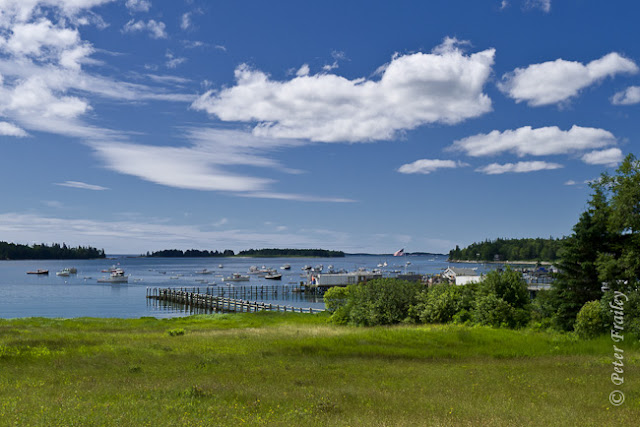 Public Beach south of the center of Camden 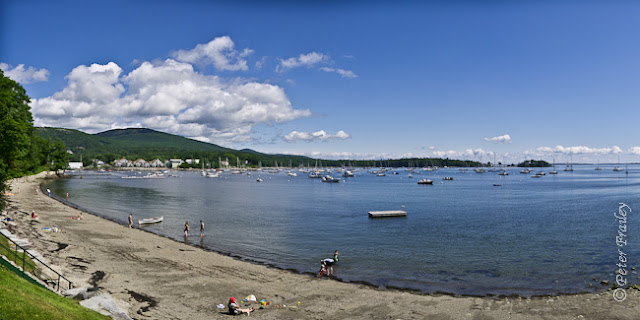 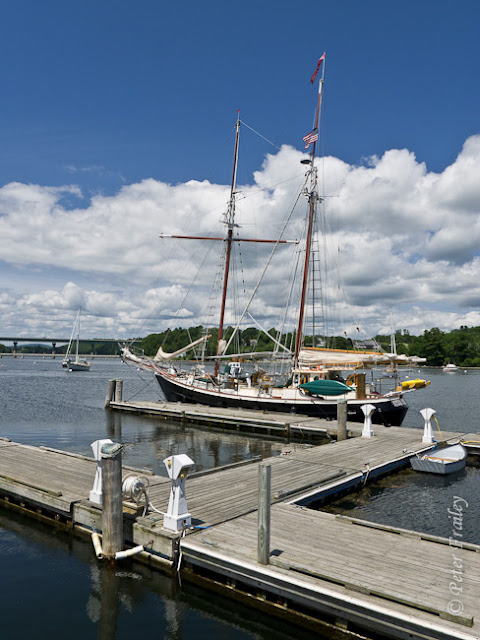 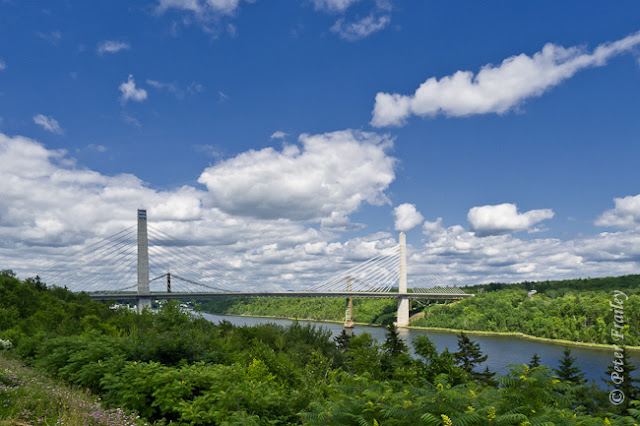 From the town landing in Blue Hills 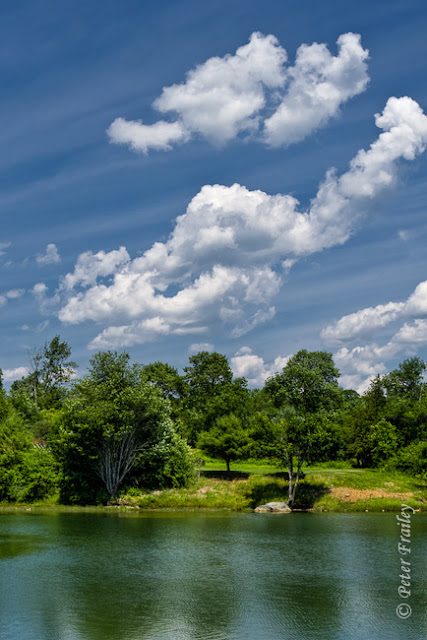 The "golden hour" is often viewed as the best time to take photographs.  Typically it's one hour after sunrise and one hour before sunset.  But I believe this has to be taken loosely, as it depends on your location.  Technically, according to Wikipedia, the golden hour is created when the sun is at an altitude of 10-12 degrees.  In the Arctic circle I think this could last most of the day.

The golden hour is known for its soft and warm light.  There are no harsh shadows or bright highlights, such as occur during the middle of the day, and which are hard for a camera to record.

During a two week vacation in Maine, I took a few images during the golden hour.  However, with the sunrise so early in the morning (twilight around 4:45, as I recall) it was pretty hard to motivate ourselves to wake up, grab coffee, and go out and meet the morning mosquitoes.

In the second and third scenes a point and shoot was I had with me at the time.  And the final shot was taken with an Olympus dSLR with my best lens.  I tried this final scene with my point and shoot, but it just didn't get as much detail out of the clouds as did the dSLR. 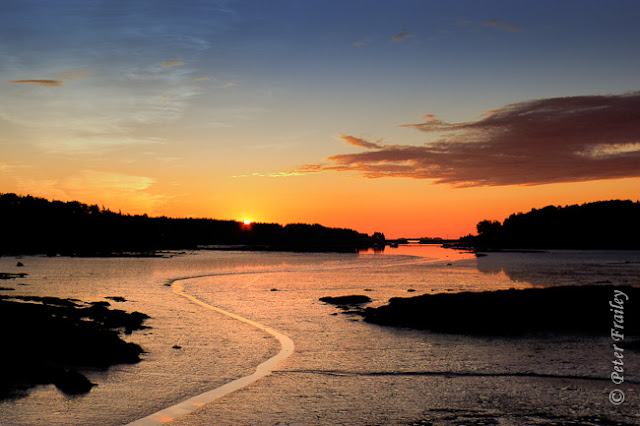 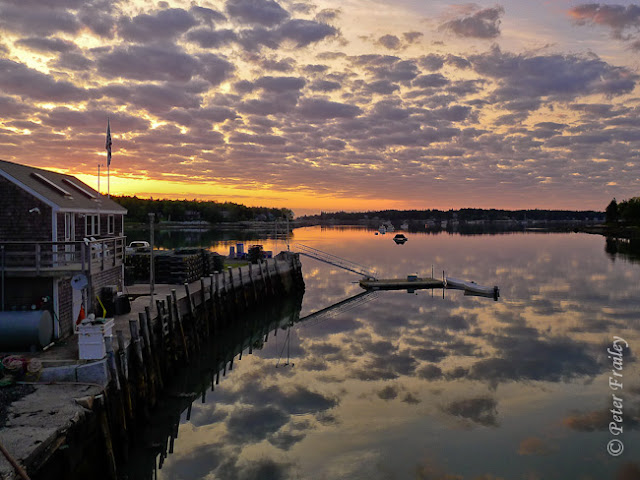 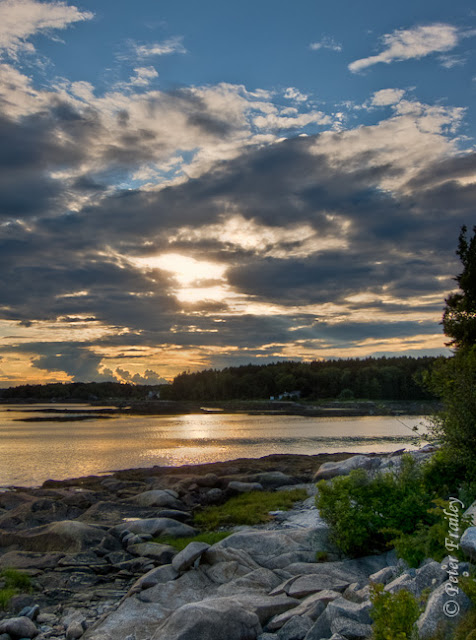 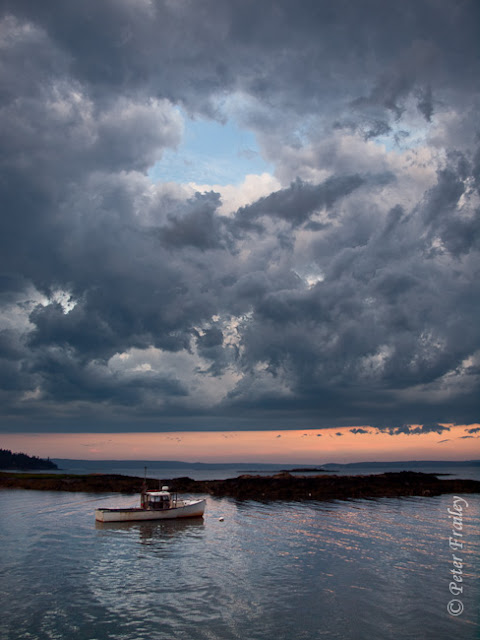 I wanted to get out and take some pictures today.  The sky was awesome and the weather dry and cool, though there with a bit more wind than I like for flower photos.  The drive to Tower Hill is easy for me and I always enjoy stopping at Davidian's Farm Stand for a couple of  Apple Cider Donuts on the way.

Overall there seemed to be lots of flowers, but upon closer examination it was clear than many were past their prime.  But after all, it is the middle of September and summer is almost over.

Based on what I see in the few pictures I did take, the bright day allowed me to easily shoot at high speed even with low ISO and this was sufficient to freeze the action.  I used my Panasonic LX5 for all of these shots.  As always, these are hand-held. 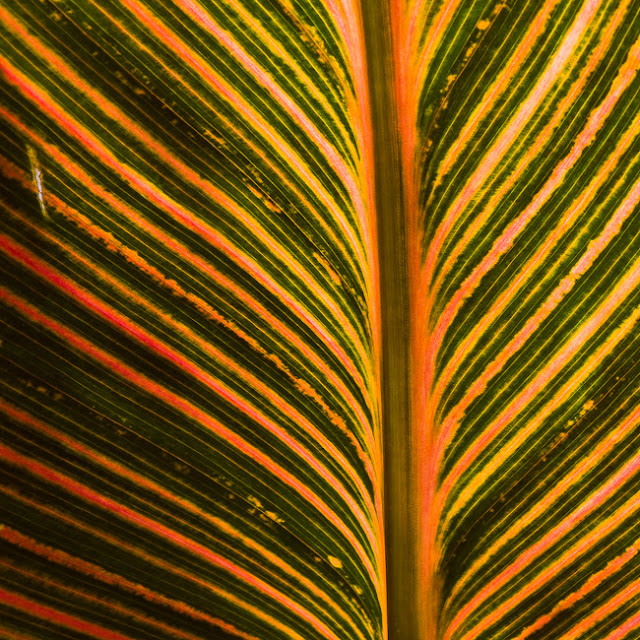 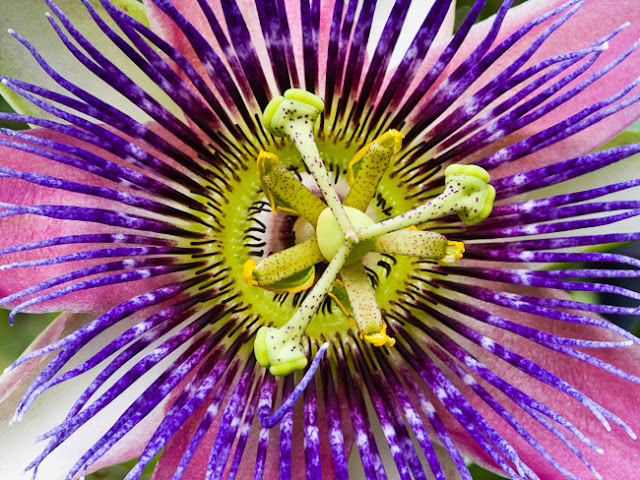 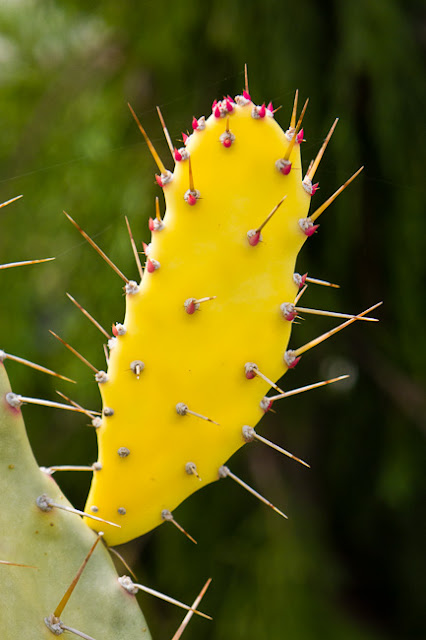 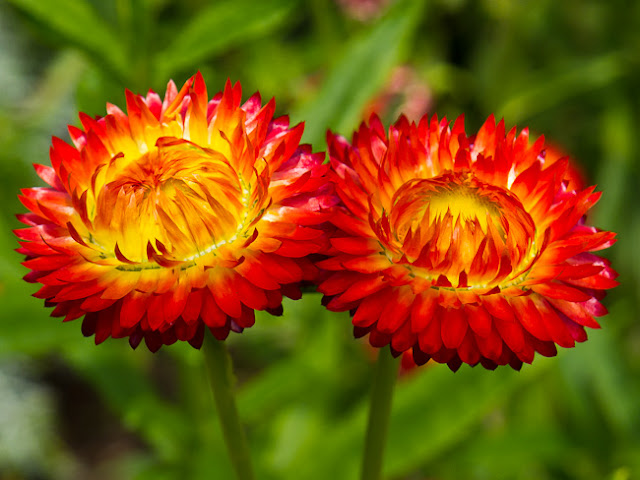 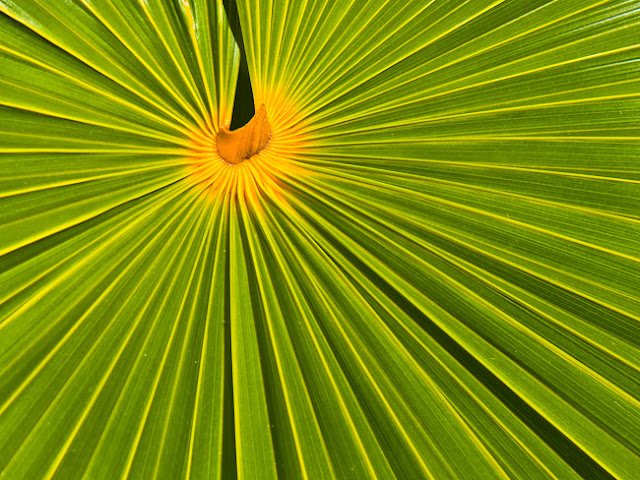 Butterfly page updated to include 55 images

I just had some fun going through all of my butterfly images.  I have about 250.  I've selected 55 which I think are good enough to upload to the Web site.  The selection can be viewed at:

http://www.peterfraileyphoto.com/butterflies
Posted by Peter F. at 14:01 No comments:

Email ThisBlogThis!Share to TwitterShare to FacebookShare to Pinterest
Labels: butterfly

This month's salon theme was "Child(ren) at Play".  This image was taken in the spring before the topic was known; so, I feel pretty luck to have captured it.  What fun to run through a field of flowers!

(The rest of the story is that this little girl's mother was soon scolding her for not staying on the path, which you can slightly see in the background.) 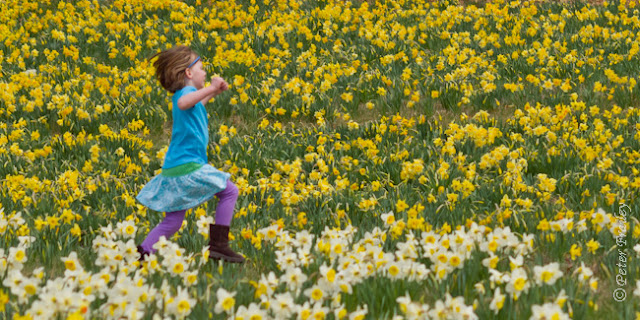 ﻿Galloping Through the Dafodils
﻿The following two images were for "open" competition.  The dafodil was in our front yard looking good on a hazy spring morning.  The butterfly in the second image below could not have been entered into the "nature" category because it was taken in a butterfly house.  It's usually hard to get a background that isn't distracting.  Though brown isn't exactly my favorite color, I think it works well here as a background.  It's actually out-of-focus brickwork on a path through the butterfly house. 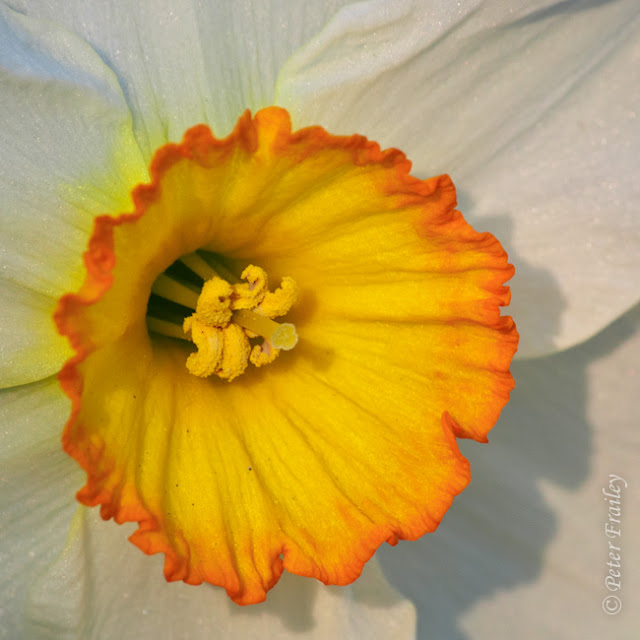 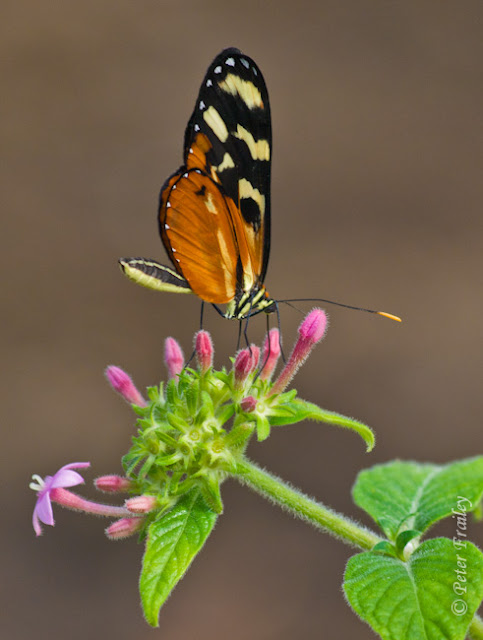 Longwing Butterfly on Flower
Posted by Peter F. at 17:25 No comments:

The color image was taken at about 5 a.m., near Spruce Head, Maine, while on vacation earlier this summer. The camera was the Panasonic LX5 point and shoot.  I also took images with an Olympus dSLR, but for some reason the compositions I got with the LX5 trumped any improved image quality that may have come from the dSLR with its much bigger sensor.  Indeed, I have been very impressed with the quality of the images that are coming from this small camera. 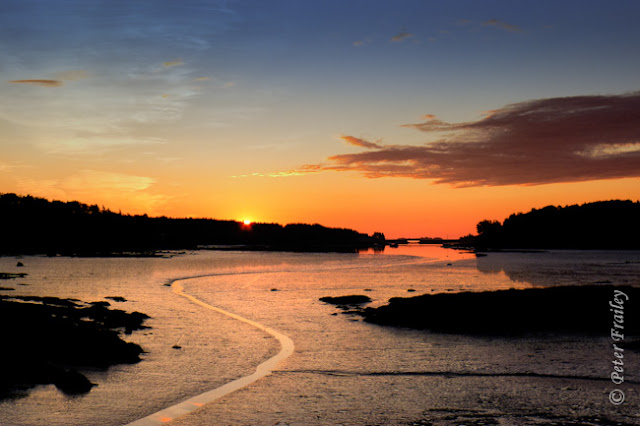 Sunrise at Low Tide
The black and white image was taken in Cape Rosier, Maine. It too was taken with the LX5. This storm came upon us very quickly at about 8 p.m. in July. You can see the edge of the front in the distance.  The storm was coming from behind me. 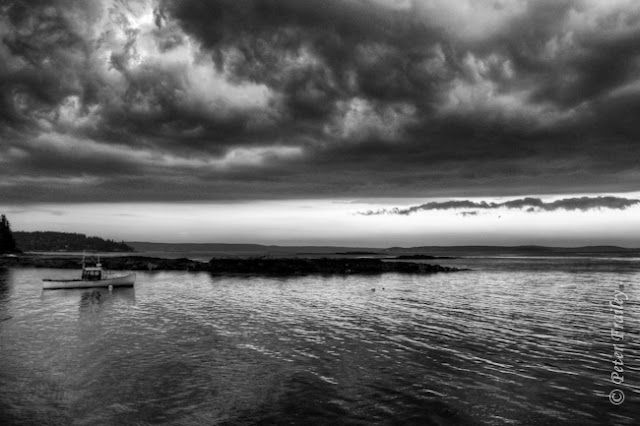