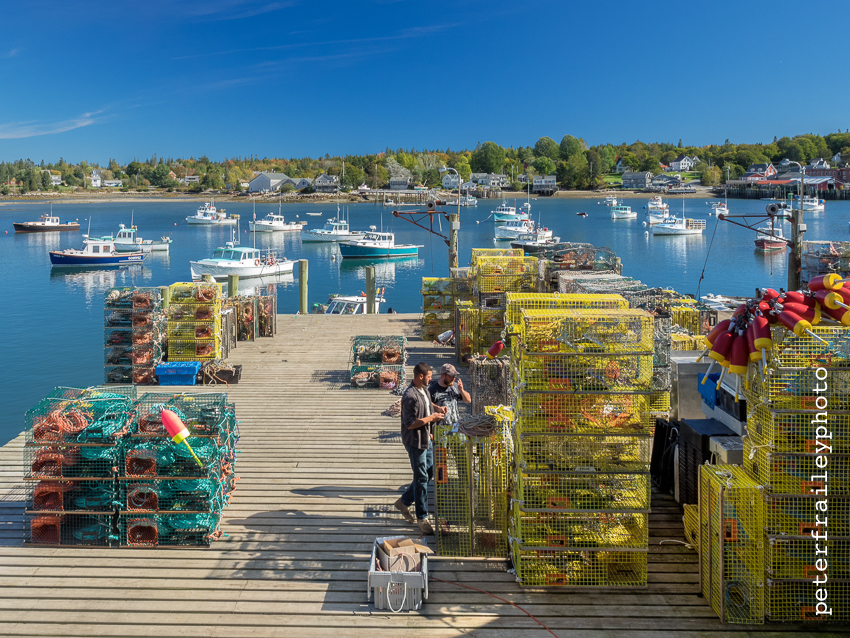 I recently picked this image to submit for a Photo Club critique.  Not sure why I picked it. It certainly isn't a "fine art" image.  I guess it is more of a documentary image. But I like it a lot, and I thought I'd post it here along with a bit of the Bernard story.

Thurston's Wharf and Thurston's Lobster Pound are located side-by-side in the Village of Bernard, Maine on Mount Desert Island (MDI), Maine.  MDI receives millions of visitors each year because of Acadia National Park. However, I should point out that Acadia is mostly on the right side of the island, along with the heavily visited Bar Harbor.  Bernard is on the left side of the island.  The left side is often called the "quiet side".

We've traveled MDI off and on for thirty plus years and have always enjoyed our visits.   But it was not until three years ago that we found (accidentally) the road that leads to Bernard. It barely exists on the maps but is worth finding.

On the “other” side of the harbor is the Village of Bernard, where this photo was taken. To see the village (and dine at Thurston’s!) you will need to get off route 103 and head south on a secondary road called, you guessed it, Bernard Road. It's easy to miss. If you are in the  area be sure to put Bernard into your GPS or cell phone navigator.  The GPS  coordinates are: Latitude 44.240766; Longitude -68.352143.

Bernard is a fishing village.  Our first visit there was about 3pm in October a few years ago.  At that hour the lobsterboats were streaming into the harbor with the day’s catch. It was great fun to watch the unloading of lobsters. However, this particular picture was taken during a subsequent visit. It was 1pm when this photo was taken, just minutes after we dined on Lobster Rolls at Thurston’s.

Before I forget, Thurston’s has a great tag line: “Thurston For Lobster”. Get it?  Thurston, as in thirstin’! 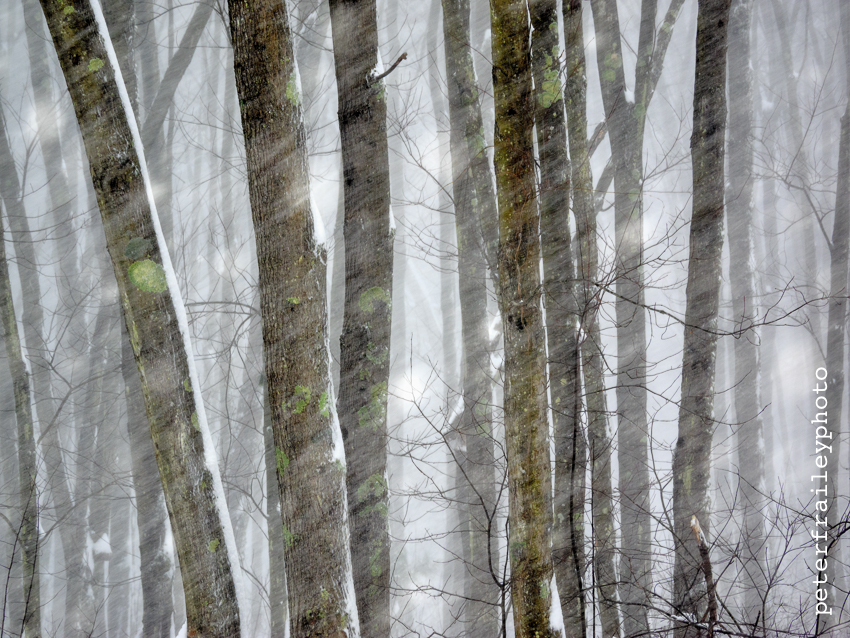 We had our second blizzard of the season last week.  Cancelations (including our local schools and my workplace) started the night before, as the storm was predicted to arrive just in time for the morning rush hour and to be heavy right through the evening rush hour.  We were right on the border between a predicted 12-18” snowfall and an 18-24” snowfall. Ultimately, we ended up with 12" of windblown, wind-packed, rain impregnated snow.

Laurie and I had no reason to drive anywhere … so we didn’t. And except for photographing this scene, we stayed indoors, watching the storm develop while sitting by a comfy fire. Our generator was all gassed up in case we needed it, but we never did lose electric.

Wind gusts reached 60mph, but our trees stayed upright. I would say "just" a few branches lay around the yard when it was all done, except that one of the branches with a 2" diameter was buried under the snow in the driveway.  After hitting that with the snowblower, I was glad I had an extra shear pin!

I mentioned at the top of this post that this was a blizzard.  I always like it when the meteorologists remind us of the technical definition of the term, as I always forget.  (This time I created a “note” in Evernote for future reference.)  To be a blizzard, these three things must exist:

Notice there is no snow depth requirement.  My guess is that we had these conditions for about 9 hours.
Posted by Peter F. at 12:46 No comments:

Email ThisBlogThis!Share to TwitterShare to FacebookShare to Pinterest
Labels: blizzard 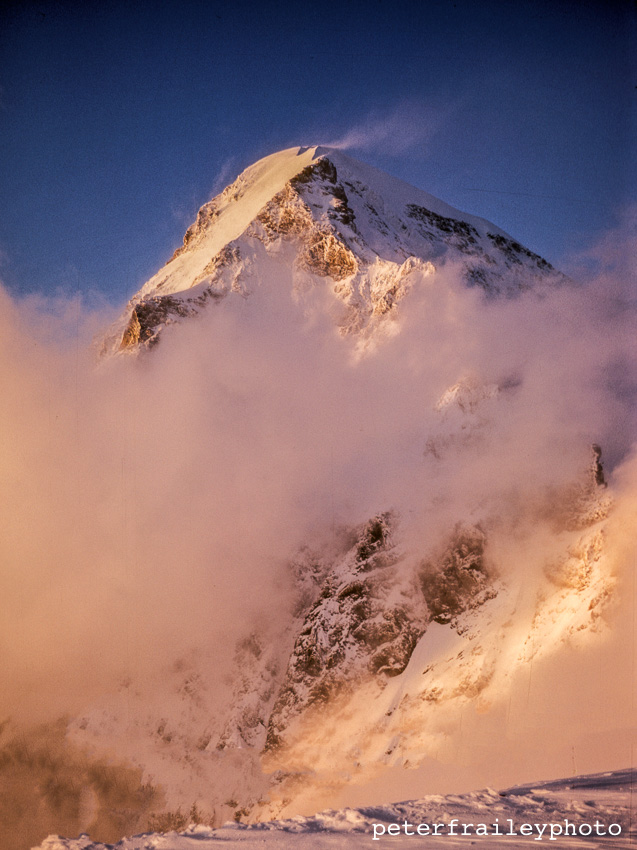 The Mönch at Sunset, Switzerland 1968

The best time to climb is said to be from mid-June to the end of September.  Many make this a day trip by taking the first train from Kleine Scheidegg to the Jungfraujoch, the highest railway station in Europe.

The easiest route to the Mönch summit is along the ridge seen here to the right of the summit. Beginning at the inside-the-mountain railway station (maybe a couple of hundred yards from where I am standing to take this picture), the trek starts with a fairly safe traverse (off to the right of this photo) across the glacier to the base of the Southeast Ridge route. From there, the vertical distance to reach the summit is 1,400 feet.  The summit has an altitude of 13,445 feet.

Much of the climbing is along an exposed and narrow ridge that is typically cornaced.  I have a decent photo of the mountain taken while standing on the glacier, which I will scan and include in my next post.

Even in summer, the ascent is mostly over snow and ice. There are some rock climbing sections, too. Though I understand that the route is technically straightforward, there are some dangerous sections because much of the climbing is along an exposed and narrow ridge.

In fact, a group of three Americans were killed that summer, falling from the ridge and 2/3 down the side of the mountain.  A small rescue helicopter was needed for the recovery, and I recall watching the operation through binoculars.


Please note that I have not climbed the Monch.  What I know is based on what I was told or have read.  I only ventured as far as the glacier traverse to the base of the Southeast Ridge route.  Though a fairly stable part of the glacier, watching out for crevasses was all the danger I wanted!

Photo Story: Sunset From the Jungfraujoch, Switzerland in 1968. 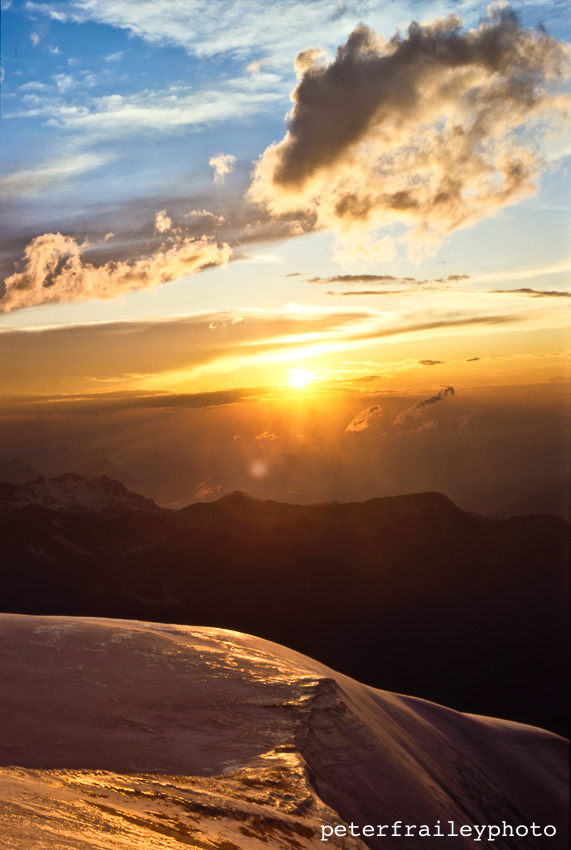 Sunset From the Jungfraujoch, Switzerland in 1968

In my last post I included an image from the Aletsch Glacier showing the Hotel Berghaus at the Jungfraujoch, Switzerland, the highest (at the time, and presumably until it burned down) hotel in Europe at an elevation of 11,000-ish feet. During my two months living and working there, afternoons and evenings were often socked in with clouds.  But occasionally we had spectacular views and sunsets.

The photo below was taken in the evening, in July or August (I was only there in the summer) of 1968, sometime after dinner. Obviously at this altitude, the sun sets late!

One thing which the photo could not record, but which I remember distinctly, was the sound of cowbells in the valley below. Even on clear evenings (i.e. not socked in with clouds) like this one, it was often too windy to hear anything but the howl of the wind. But, on this particular night, the air was still, and the view looking west and the sounds from the valley below had me smiling.

Photo Story: Nearly 50 Years Ago I Was In Switzerland

Today I'm going back about 50 years, to the first time I borrowed my dad’s “good” camera. I was on my way to a summer in Europe.  The camera was a German made Kodak Retina iiiC rangefinder with a 50 mm F2 Schneider lens.  By today’s standards that would be a fairly limited kit; but back then it was all I had and I really enjoyed it.

The main venue was Switzerland in 1968, during a college summer break.  I had a job at the Hotel Berghaus atop Switzerland’s Jungfraujoch.  This hotel was carved into the rock and was at the head of the Aletsch Glacier.  It was located in the "saddle" (joch) between two mountains, both of which are climbing destinations: the Jungfrau and the Mönch.  The Eiger is also nearby.

The hotel has since burned down; but at the time it was the highest hotel in Europe.  The elevation of the hotel was 11,000 feet.

Access to the hotel by tourists (and there were many every day) was by an electric powered train that traveled through a winding tunnel inside the mountain. The entrance to the tunnel is at the base of the Eiger, in Kleine Scheidegg, and it winds for six miles inside the Eiger and Monch mountains to the Jungfrau terminal, the highest train station in Europe.

Along the tunnel there are two stops.  Passengers can get out at these stops and see through windows cut into the north wall of the famous Eiger.

What did I do in the hotel?  I worked in the kitchen. My specialty was pommes frites (French fries). Seriously! I made them by hand, using a hand operated machine that drove a whole potato lengthwise through a grid of blades.

Lunch was a madhouse as hundreds were served daily (unless we were in the middle of a cloud or snow storm, conditions which usually meant very few would invest in the long and expensive train ride to the hotel).  Generally this was a day-trip destination, with very few visitors spending the night or staying for dinner.  As I recall, the best views were in the middle of the day.  In the afternoon, the clouds often rolled in and visibility could go to zero.

I took the photo below after skiing down to the glacier from the hotel. There is an exit to the mountain just out of sight to the far right. Notice the roof to the hotel in the background.  It's barely noticeable because it blends so well into the rock.

Seen in this picture is single-engine plane which crashed while flying low and slow so that photographers could take some photos.  All aboard were killed. 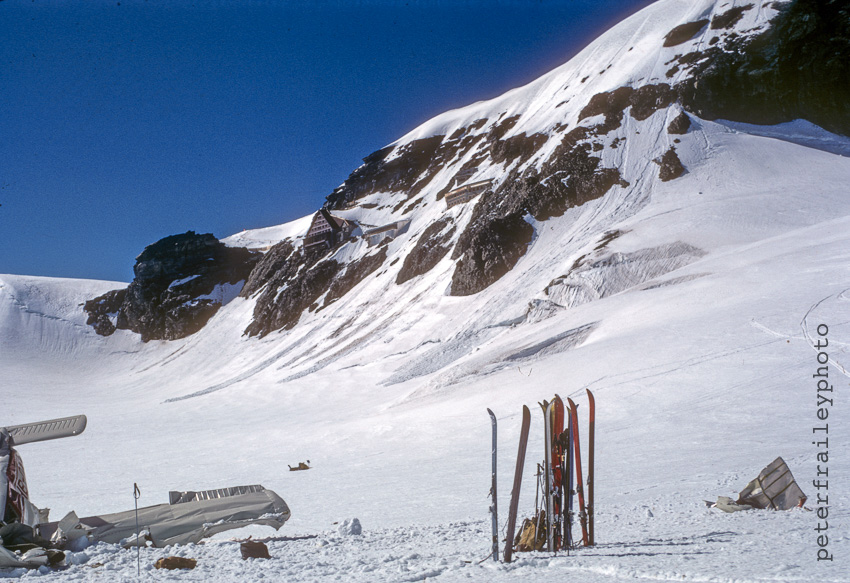