In 2015 I wrote several posts about why I prefer my Sony a6000 over my EM-1. All that I wrote then remains true, but now it's time to reverse things. There are also reasons why I prefer the EM-1 more than the a6000. That's why I own both!  Because of the three items listed below, it is the EM-1 that is more likely to come along on vacations and excursions.

The Olympus system has three things going for it that trump the Sony a6000 for general all-around use.

In no particular order:

1.  Dual dials on the top plate. I use the front dial easily and nearly continuously to adjust EV compensation. The Sony has just one top dial and it's a thumb dial, with the second dial being the back dial (on the back side of the camera). 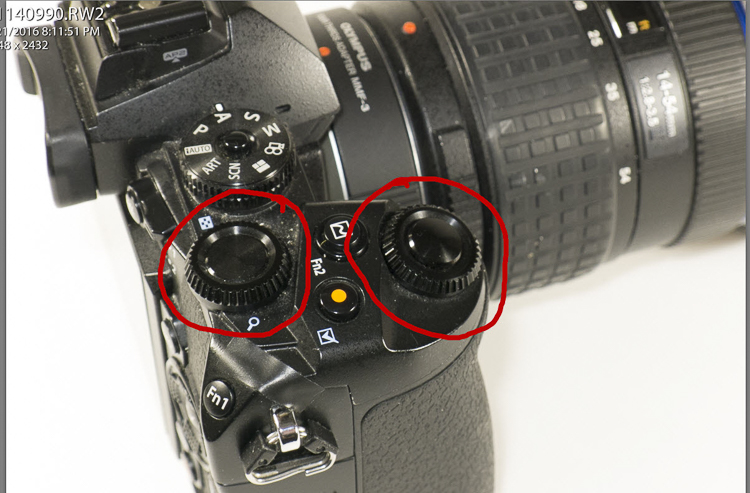 2.  A fabulous histogram. The Olympus live histogram is the largest I've used, and is very detailed with a red warning on the right side for all pixels that may be blown out (i.e. white with no detail). As you can see below, the histogram shows in red that a few pixels are "blown", which I presume are specular highlights off the plastic bag in which some of my fishing fly tying materials are stored.  Note too that the histogram sits at the bottom of the middle of the frame. This is where I can see it best. The Sony histogram sits on the bottom right side.  Because I wear glasses (I can't get my eye as close to the EVF as non-wearers) it is difficult for me to see the all-important right side of the histogram on the Sony. No problem on the Olympus. With both cameras the histogram is grey, but the Olympus has a useful "histogram-within-a-histogram": in green it overlays the gray histogram with a "sub-histogram" of what the center focus point is metering.  It's like having spot metering and matrix metering at the same time! 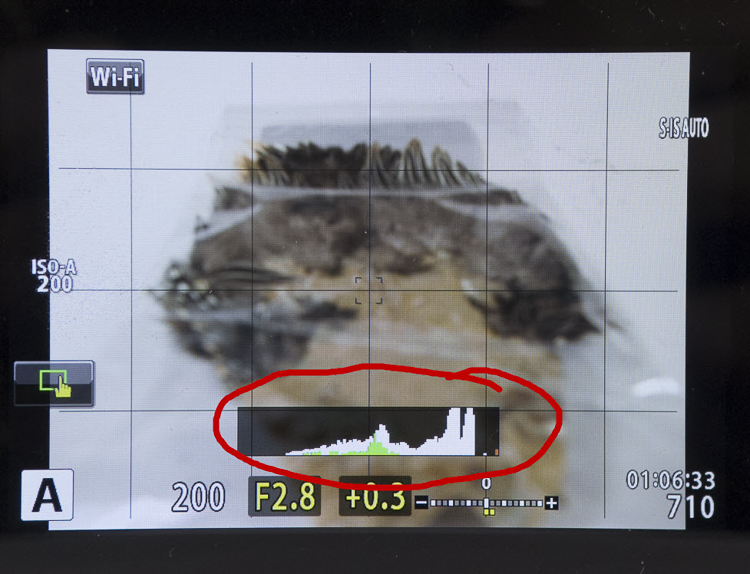 3.  Lenses. The mFT system has beautiful zoom and prime lenses, and there are so many excellent ones to choose from. I only have a few; however, they cover a wide range of needs. The 12-40 "Pro" F2.8 zoom takes care of 70% of my focal length requirements. It is sharp across the frame, and like many Olympus zooms it even has awesome closeup capabilities. Like the EM-1 body, it is weather-proofed. More recent purchases include the Panasonic 35-100 F2.8 and the Panasonic 14-140 "travel" zoom. For primes I have the Olympus 25mm f1.8 for low light situations. Mostly this sits in the bottom of my bag for emergencies, but it weighs just a few ounces. I also have the 60mm f2.8 macro. I love macro!

4. The Olympus IBIS (in-body image stabilization) isn't necessarily better than the OIS (optical image stabilization) on the Sony, but one advantage of IBIS is that when I use old manual lenses, they are instantly stabilized. This means my 50 year old Nikon 58mm F1.4 lens is fully stabilized when used on the Olympus! There is also an advantage with new third party lenses, like the Sigma 30mm and 60mm both of which I own in E mount for the Sony.  They are not stabilized lenses.  However, if I instead owned the same two lenses in the mFT mount (which is available) they would be stabilized on the Olympus because of the in-body stabilizing system.

I may have to expand the above list.  I recently downloaded the new firmware 4.0. It has some really nice features that appeal to me.  I decided I don't particularly like the new silent shutter option for general use, but there are situations where it will prove helpful. I am excited about the focus stacking and focus bracketing features in particular. But I haven't used either in any serious way...yet.
Posted by Peter F. at 10:27

Email ThisBlogThis!Share to TwitterShare to FacebookShare to Pinterest
Labels: Olympus E-M1, sony a6000